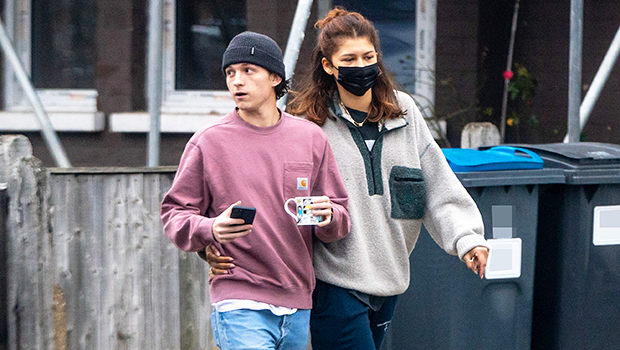 Zendaya and Tom Holland looked like a loving and affectionate doting couple when they stepped out for a stroll while enjoying a beverage in comfortable-looking outfits.

Zendaya, 25, proved she’s not afraid to show off her adoration for her boyfriend Tom Holland, 25, during their latest outing! The actress and actor were in the U.K. to visit his family and were photographed walking outside together while casually and warmly dressed. Zendaya couldn’t resist wrapping her arm around her beau’s waist while they stood side by side and he enjoyed a drink in a mug.

The beauty wore a gray and black pullover, dark blue sweatpants, and red and white sneakers during the outing while Tom wore a mauve sweatshirt, light blue jeans, and orange and white sneakers. He also topped off his look with a black knit cap.

Before she got attention for her visit to the U.K. with Tom, Zendaya made headlines for her stunning Lancome ad. She posed in a white keyhole long-sleeved top in the ad and had her long curly hair down as she rocked a classic makeup look that brought out her natural gorgeous features.

Zendaya has been on top of the world when it comes to her career and her romance with Tom. Although she tends to be mostly private about the latter, the attractive duo often show up to events together and always look like they’re having the time of their lives. A source recently told us that the stars’ relationship actually started before they were first spotted kissing in public for the first time.

“Although they were not photographed kissing until July, their interest in each started before that. They didn’t want to make it a thing while filming Spiderman (or doing reshoots) because they did not want it to affect production in any way,” the insider EXCLUSIVELY told HollywoodLife last month before also touching on their future plans.

“Just like any other serious couple, they have talked about what their future holds, including getting married and having kids together,” the source explained. “They both want the same things when it comes to a family. But he knows that she is not ready for that at the moment and that she is extremely focused on her career.”