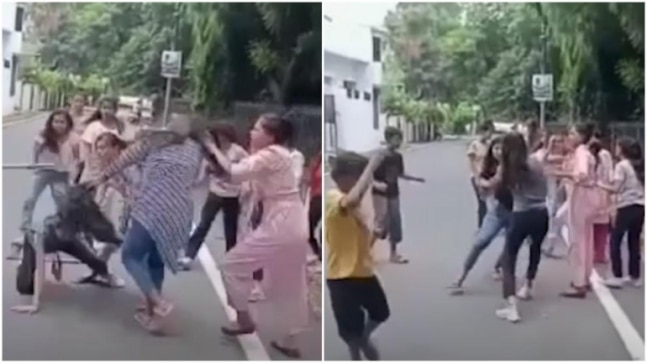 Two groups of women got into a brawl and hit each other with sticks in a viral video from Haldwani. The reason behind the fight is not known.

Women hit each other with sticks while fighting on street in video from Uttarakhand.

You never know what you can stumble upon on the internet and this bizarre video is proof of that. In an incident from Haldwani in Uttarakhand, two groups of women got into a violent fight in the middle of the road. A clip of the same has surfaced online and has shocked netizens all over the internet.

In the now-viral video, two groups of women can be seen violently fighting in the middle of the road. One of the young women beat the other one with a stick. They even pulled each other’s hair and while that was happening, another woman entered the brawl. A few children can be seen observing the bizarre incident. The footage was recorded by some men who chatted behind the camera.

Police can be seen entering the scene towards the end of the video. The reason behind the fight is not known.

Local media reports suggest that the brawl happened near the Police Yoga Park and no one suffered grave injuries. The police will also be identifying the women and taking action against them.