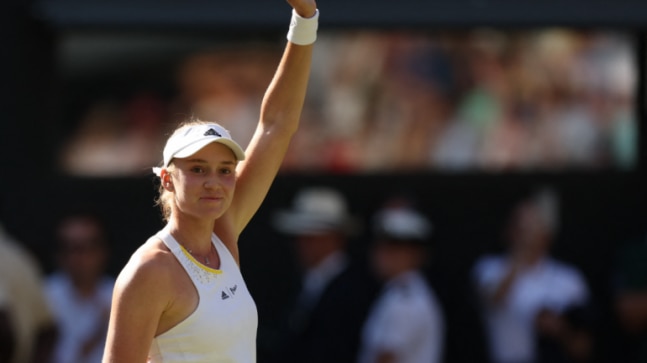 Elena Rybakina knocked Halep out in straight sets in the semi-final match at Wimbledon 2022. The Russian-Kazakhstan international will be facing Ons Jabeur in the final.

Russian-Kazakhstani international Elena Rybakina knocked out Romanian Simona Halep in straight sets in the semi-final of the Wimbledon 2022 6-3, 6-3, to storm into the finals of the grass court tournament.

Rybakina, who did not show any signs of nerves in the game said that she was completely focused today, something that allowed her to win the game. Speaking after the semis, she said in the on-court interview that she played some solid tennis on the night.

“It was a great match and Simona is a great champion and we had many tough matches before and I was really focused today and I am really happy with my performance. And I think that I played really solid tennis today,” she said.

She was welcomed with loud cheers at the end of the game and said that the way that the crowd backed the two players was unbelievable.

Asked about what led to the perfect showing, the player said that she was mentally prepared for the game.
“I don’t know how to describe it. It was really really good. Usually I have ups and downs and it comes from the nerves, but I think today I was mentally prepared and I did everything that I could and it was an amazing match,” she concluded about the game.

Rybakina will be facing Tunisian Ons Jabeur in the final. Asked about the same, she said that it was important to have fun and she believed that it would be a great game of tennis.

“I think it is going to be a great match, she is a really tricky player and it is not going to be easy to play her drop shots. I will try to do my best and enjoy it and have fun of court,” she concluded her interview.