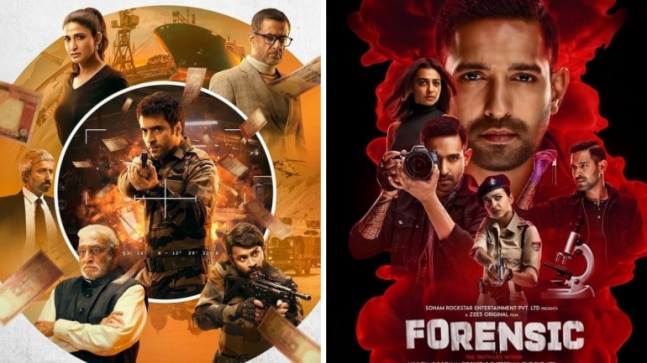 What’s your ideal weekend plan? Sit with your favourite beverage, order a pizza and start the binge game, right? We get you. And to make your watch session easier, we are here with a list of all that’s new on several OTT platforms. Choose one or many and get the watch party started!

The third season of The Umbrella Academy is now streaming. The popular Netflix series is about a dysfunctional family of adopted siblings, who are also superheroes.

The Man from Toronto

Netflix show The Man from Toronto drops on the streaming platform on June 24. Directed by Patrick Hughes, the story revolves around a case of mistaken identity that forces a bumbling entrepreneur to join hands with an assassin.

Ajay Devgn’s Runway 34 is based on the true story of the Jet Airways Doha-Kochi flight when the flight had a narrow escape after facing difficulties. It landed at the airport due to bad weather and unclear visibility.

Mahesh Babu’s Sarkaru Vaari Paata is one of the many successful South films of 2022. Directed by Parasuram Petla, the commercial entertainer features Keerthy Suresh as the female lead. The film follows the story of a bank manager who exposes a fraudster and helps hundreds of people get justice. The film features Mahesh Babu, Keerthy Suresh and Samuthirakani in lead roles.

In this six-part psychological thriller, Erin Doherty plays Becky Green. She is a quiet, social media-obsessed girl who suffers from low self-esteem and paranoia. She constantly compares her mediocre life to the lavish ones she sees on Instagram.

When a woman’s boyfriend gets hit by a car and dies, she listens to a mixtape given by him and realises that she can go back in time. But what’s left for her is to discover if she can change what happened or if the death of her boyfriend was always part of the universe’s plan.

The long-awaited superhero Marvel movie starring Benedict Cumberbatch made its OTT release on June 22, 2022. The film is based on the Marvel comics which present Benedict Cumberbatch as Stephen Strange aka Doctor Strange. This movie also stars Xochitl Gomez, Elizabeth Olsen and Rachel McAdams in key roles. The story is based on Strange protecting Chavez, a teenager who has superpowers that can travel beyond the multiverse.

The musical film is based on the 1995 Academy Award-winning short film Trevor. It follows a 13-year-old on a turbulent journey of self-discovery.

Rise is based on the real-life story about the family that produced the first trio of brothers to become NBA champions in the history of the league. The biographical sports drama is directed by Akin Omotoso.

Doon Kaand is a ‘hair-raising story of revenge’, set in Uttarakhand. The 10-episode series stars Iqbal Khan, Donal Bisht, and Indraneil Sengupta in key roles. If you are looking for thrillers, this might be your perfect pick. The series has been streaming since June 20.

Military drama series Avrodh 2 drops on Sony Liv on June 24. The second season of Avrodh is inspired by the ninth chapter of the book, India’s Most Fearless authored by Shiv Aroor and Rahul Singh.

Radhika Apte returns to the screen after a two-year hiatus with Forensic. The actress shares screen space with Vikrant Massey. The cop thriller isn’t just any murder mystery but will leave you spellbound with a massive twist in the end.

Jack Osbourne studied the paranormal most of his life and is no stranger to the supernatural. However, one thing he has never tackled is the world’s most mysterious cryptid, Bigfoot. Along with his friend, Jason Mewes, Jack gears up for a quest to find proof of the infamous beast in the new two-hour Discovery+ special.

The Girl from Plainville

The Girl From Plainville, which originally premiered on Hulu on March 29, will begin streaming on Lionsgate Play from June 24. It is inspired by the true story of Michelle Carter’s unprecedented ‘texting-suicide’ case. Based on the definitive Esquire article of the same name by Jesse Barron, the limited series explores Carter’s relationship with Conrad Roy III and the events that led to his death and, later, her conviction of involuntary manslaughter. Alongside Elle Fanning, the series stars Chloe Sevigny, Colton Ryan, Cara Buono, Kai Lennox and Norbert Leo Butz.

Loot stars Maya Rudolph as MacKenzie Scott-like figure (Jeff Bezos’s ex-wife). She delves into extreme wealth and decides to channel her out-of-touch energy into running her non-profit. The show takes the wealthy characters to task while delivering plenty of laughs along the way. Watch it on Apple TV+ starting June 24.