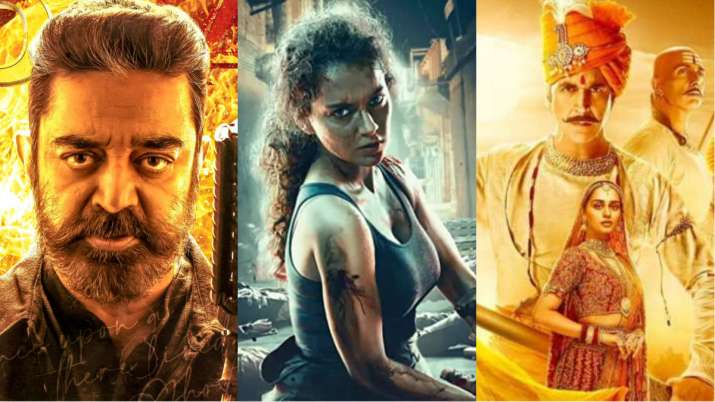 For movie lovers, the month of July is going to be a big treat as multiple films from Bollywood, Hollywood and South cinema will be released on the OTT platforms. Some of these films have already been released in the theatres and will be making it to the streaming giants for the audience who missed watching them on the big screen. While there are a few films that will be exclusively released on Prime Video, Hotstar, Netflix and Voot. Here’s a list of movies that will surface on popular OTT platforms like Netflix, Amazon Prime Video, Disney+ Hotstar, Zee5, Voot, Mx Plater and more.

Kangana Ranaut‘s action-packed Dhaakad witnessed a low run at the box office. Helmed by Razneesh Ghai, the film also stars Arjun Rampal and Divya Dutta. Kangana plays the role of Agent Agni in the film that will see her take on the layered subject of child trafficking and exploitation of women. The film is all set to stream on Zee 5 from 1st July.

Akshay Kumar‘s period drama Samrat Prithviraj is based on the life of the mighty Samrat Prithviraj Chauhan. In the film, Akshay is seen essaying the role of Prithviraj Chauhan, the legendary warrior who fought valiantly against the merciless invader Muhammad of Ghor. Manushi Chillar marked her Bollywood debut with this film and played the role of Sanyogita. Directed by Dr Chandraprakash Dwivedi, the film will start streaming on Amazon Prime from July 1.

Roland Emmerich’s sci-fi film Moonfall will be released on July 1 on Linesgate Play. In Moonfall, a mysterious force knocks the moon from its orbit around Earth and sends it hurtling on a collision course with life as we know it. Emmerich has directed and penned the script of the movie.

Kamal Haasan’s Vikram has enthralled the audience in the theatres and had a successful run at the box office. Helmed by Lokesh Kanagaraj, Vikram also features Vijay Sethupathi and Fahadh Faasil in lead roles. The film will hit the OTT platform Disney+Hotstar on July 8. It will premiere in four different languages – Tamil, Telugu, Kannada and Malayalam.

Tamil superstar Dhanush made his Hollywood debut alongside Ryan Gosling and Chris Evans in The Gray Man. The spy-thriller is based on the best-selling book of the same name by Mark Greaney. The film will start streaming on Netflix from July 22.