Many say nobody wants to offend the meeting organiser by skipping out. (Representational)

Unnecessary meetings are a $100 million mistake at big companies, according to a new survey that shows workers probably don’t need to be in nearly a third of the appointments they attend.

The survey, conducted over the summer by Steven Rogelberg, a professor of organizational science, psychology and management at the University of North Carolina at Charlotte, asked 632 employees across 20 industries to study their weekly calendars and gauge how much time they actually spent in meetings, what they got out of them and how they responded to invitations. Employees spend about 18 hours a week on average in meetings, and they only decline 14% of invites even though they’d prefer to back out of 31% of them. Reluctantly going to noncritical meetings wastes about $25,000 per employee annually, and projects out to $101 million a year for any organisation with more than 5,000 employees. 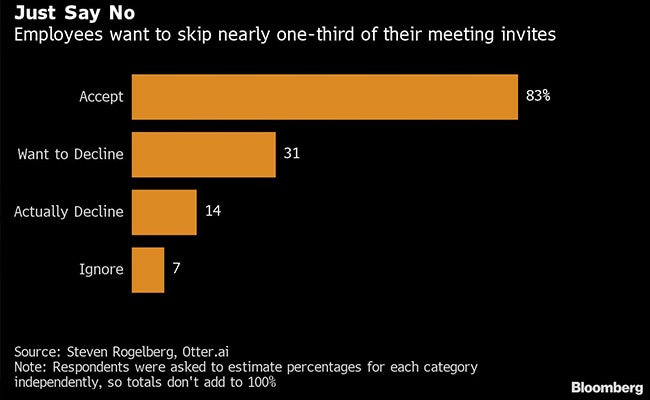 “Meetings do control us, and bad meetings have an enormous cost,” said Rogelberg, who’s been researching meetings for two decades. “You get a meeting invite and say, ‘I don’t need to be there,’ yet you say yes – why?”

Many say yes because it’s a workplace norm – nobody wants to offend the meeting organiser by skipping out, or have co-workers think they’re not engaged. Others hate having to chase down updates on what happened. Most managers don’t talk to their staff about how and when to decline meetings, in part because they’re typically the ones leading them and like the sense of control they provide, Rogelberg said. The survey found women were more concerned than men about declining meetings for fear of bugging colleagues to bring them up to speed later.

“Personally, there are days and weeks when my meetings are running me,” said Betsy Peters, vice president of marketing and product strategy at Riva, an Edmonton, Alberta-based provider of revenue-data software for the financial services sector. Peters needed to get a better handle on Riva’s meetings when the pandemic hit and workers went remote, so she asked Rogelberg to speak to Riva’s 100 or so employees. Since then, they’ve gotten better at trimming down the invite list, and also shortened all meetings so people could take summary notes or prepare for their next call.

“The tyranny of the 30-minute meeting is over,” she said. “We’ve moved the needle on meetings.”

Few companies have, though. Rogelberg’s earlier research found that poorly managed meetings can hurt employee engagement and even boost their intention to quit, and the morass of meetings got worse during the pandemic due to the shift to remote work and videoconferencing. Data from Microsoft Corp. based on thousands of users of its workplace software found that time spent in meetings has more than tripled since February 2020, and the number of weekly meetings has more than doubled. Those virtual meetings “tend to be more cognitively demanding, more prone to distraction, and less effective in many ways than their in-person counterparts,” a team of researchers concluded in a recent study that examined how communication patterns changed right after pandemic lockdowns hit in 2020.

Managers, who spend about 20% more time in meetings than the average employee, need to be more judicious in calling them and more upfront about letting people decline them, Rogelberg said. Meeting declines did rise 84% over the past year, according to more recent data from Microsoft, but that’s likely due to the fact that overlapping meetings increased 46% during the same period.

Agendas should be framed as a set of questions to be answered, not a set of topics. “If you can’t think of any questions, you shouldn’t have had the meeting,” he said. Inviting people to just part of a meeting also helps improve their efficacy, the survey found. Otherwise, people tune out: Respondents to Rogelberg’s survey said they end up multitasking during 70% of an unnecessary meeting.

To estimate the cost of unnecessary meetings, Rogelberg calculated employees’ hourly pay based on their self-reported salary and hours worked per week, then extrapolated those figures to represent firms of different sizes. Otter.ai Inc., whose software helps companies record and transcribe meetings, funded and partnered on the study.