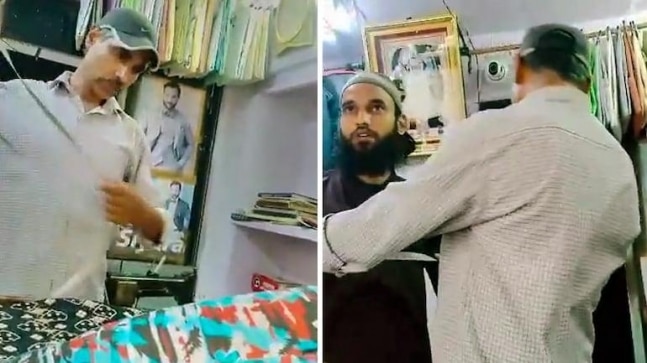 A shopkeeper named Kanhaiya Lal was murdered in broad daylight in Rajasthan’s Udaipur on Tuesday. Both the accused, Mohammad Riaz and Ghouse Mohammad, have been arrested.
When both were attacking the shopkeeper, everyone ran away but his colleague who was working at the shop, Ishwar Singh, alone tried to fend them off and save him.

He tried his best to save Kanhaiya Lal, but both the accused also mercilessly attacked him, after which he got seriously injured. At present, Ishwar Singh is being treated at Maharana Bhupal Hospital in Udaipur, he has been administered 16 stitches.

In the press conference, Rajasthan DGP ML Lather said that both the accused have been booked under the Unlawful Activities (Prevention) Act (UAPA). He further stated that one of the accused, Ghouse Mohammad, has links with the Karachi-based Islamist organisation Dawat-e-Islami.

Lather also said that Ghouse Mohammad had gone to Karachi in Pakistan in 2014 and had links with Dawat-e-Islami.

Dawat-e-Islami, a religious movement based in Pakistan, claims to be a non-profit entity propagating the message of Prophet Muhammad. It offers online courses in Islamic studies and also runs a television channel. Dawat-e-Islami also gives special training to offer Dawah (invitation to Islam), convert and radicalise people through online courses.

Two men murdered a Hindu tailor in Rajasthan’s Udaipur on Tuesday and posted videos online in which they can be heard saying that they were avenging an insult to Islam after the victim had allegedly put out social media posts in support of suspended Bharatiya Janata Party spokesperson Nupur Sharma.

The police arrested the two accused in the Bheem area of Rajsamand district on Tuesday night. The accused were caught while they were trying to flee.

India Today TV has learnt that the murder followed a post put up by the shopkeeper’s eight-year-old son in support of Bharatiya Janata Party leader Nupur Sharma.