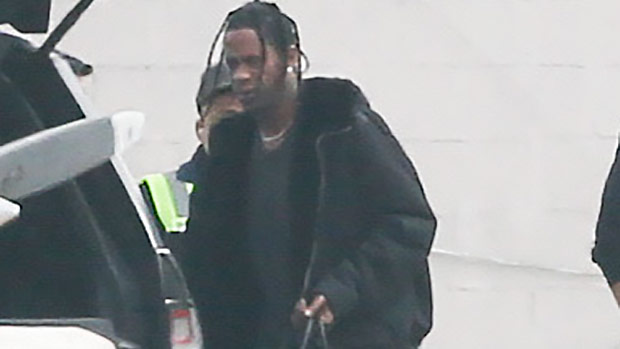 Travis Scott was photographed stepping off a private plane at an airport in Los Angeles on Jan. 8. The newly-single rapper took his bags to a waiting SUV with a somber look on his face. It was the first time he was seen out publicly since news broke that he and Kylie Jenner had split once again. The two have been in an on/off relationship since April 2017.

Fans have noticed that Kylie has been active on social media recently, with Travis not appearing in any of her posts. The two spent Christmas and New Year’s apart, with Kylie traveling to Aspen to spend time with family and friends over the holidays instead of being with Travis. “This has happened so many times before,” Us Weekly, who reported the split, confirmed. “They’re known to be on again, off again, but always remain friends and co-parents.”

Kylie and Travis first got together in April 2017 following her breakup from Tyga. They went on to welcome their first child, Stormi Webster, the following February, so their relationship got off to a serious start. The two first split in the fall of 2019, but eventually reconciled quietly. They had their second child, a son, in Feb. 2022. Kylie and Travis have yet to confirm their nearly one-year-old son’s name, and have also not publicly shared any photos of him.

When the little one was first born, Travis and Kylie gave him the name Wolf Webster, but they eventually changed their minds. However, as of September, they had not changed the toddler’s name on his birth certificate, according to Kylie. She explained that they did have a new name for baby, but the reason they were waiting to make the change official was because of Travis. “One day he’ll be like, ‘Oooh, this name’s kind of cool,’ and change it again,’” Kylie admitted. It’s unclear if they’ve legally made the change or not in the months since that interview.