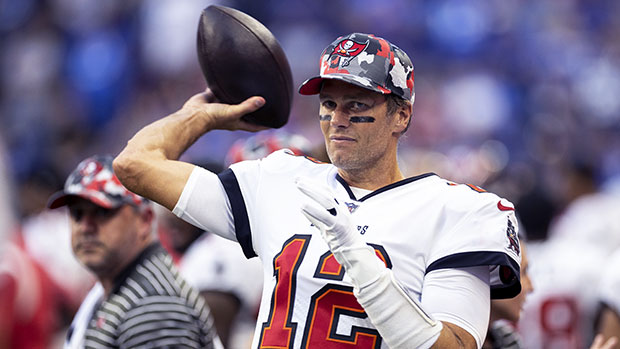 More than a week after Tom Brady shot down the fan theories that he was competing on The Masked Singer, the Tampa Bay Buccaneers quarterback addressed his 11-day absence from the team’s training camp on Saturday (Aug. 27). “It’s all personal, you know,” Tom, 45, said when speaking to reporters following the Bucs preseason game against the Indianapolis Colts. “Everyone’s got different situations they’re dealing with. We all have really unique challenges [in] our life.

Tom Brady on his absence from camp for 11 days. pic.twitter.com/OObngCLDCB

“I’m 45 years old, man. There’s a lot of sh-t going on, so you got to try to figure out life the best you can. You know, it’s a continuous process,” he added. During the Bucs’ loss to the Colts, Brady completed six of eight passes for 44 yards, per Fox Sports. This lone drive – which included a 20-yard completion to newly minted Buc Julio Jones – marks the least Brady has played in the preseason during his 23-year career (aside from 2008, when he was nursing an injury.)

At the start of August,  Tampa Bay Buccaneers head coach Todd Bowles announced that Brady was on leave from the NFL to deal “with some personal things.” The unusual absence sparked speculation that Tom was busy pursuing other activities, including a guest spot on The Masked Singer. Tom addressed the rumors on Aug. 22 with a video supposedly of someone (supposedly Tom?) riding a motorcycle while wearing nothing but a helmet, gloves, shoes, and some Brady brand underwear. “Wasn’t on The Masked Singer last week,” Brady captioned the video. “Was wearing a mask, though.”

Wasn’t on the masked singer last week. Was wearing a mask though. https://t.co/E3wg9LaC1I

There was also a report that Tom was interested in playing with the Las Vegas Raiders before signing with the Bucs and that he might have been spending time with the team in Sin City. Tom shut down that talk during his preseason post-game presser. “I read all these stories about all these different places I was supposed to go or could’ve gone, and I’m like, ‘I only was gonna go to one place,’ which was here,” said Brady. “I think this whole organization knows that. All the conversations that we’ve had over a period of time, I chose the right place for me. Very proud of the effort that everyone’s put in to make the relationship work.”

“It’s been an amazing relationship,” added the seven-time Super Bowl champion, “and I’m very grateful to everybody for allowing me to come down here and experience this part of my football life, which I look back and would probably been incomplete had I not had it. I’m happy I’ve had it.”

The Tampa Bay Buccaneers kick off their 2022-23 season by playing the Dallas Cowboys on Sept. 11.

Bridget Moynahan’s Husband Andrew Frankel: All About Their Marriage & Her Time With Tom Brady