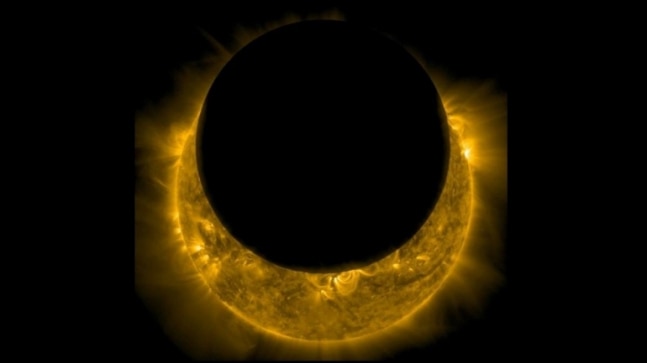 The Solar Dynamic Observatory has captured stunning visuals of a partial solar eclipse as the Moon crosses the Sun’s path.

A partial solar eclipse as seen in space. (Photo: SDO)

The Solar Dynamic Observatory, a spacecraft targetted toward the Sun observing the rapid developments happening at the star in our solar system, has managed to capture a unique event happening in space. The spacecraft has seen a partial solar eclipse in space as the Moon crosses the face of the Sun.

The observatory recorded the event that lasted for nearly 35 minutes in space and beamed back the images from the celestial event.

According to spaceweather.com, which tracks the developments happening in space and on the sun, at the peak of the eclipse, the Moon covered 67% of the sun, and the lunar mountains were backlit by solar fire.

Also Read | What will James Webb Telescope’s first photos have? We have a clue

“High-resolution images like these can help the SDO science team better understand the telescope. They reveal how light diffracts around SDO’s optics and filter support grids,” spaceweather.com said in its advisory released with the images of the event.

Meanwhile, a dark filament of magnetism erupted in the sun’s northern hemisphere on June 28, however, it did not leave the sun’s atmosphere. In what is good news, no coronal mass ejection (CME) was detected after the eruption.

The Solar Dynamic Observatory (SDO) has since 2010 been studying how the Sun creates solar activity and drives space weather — the dynamic conditions in space that impact the entire solar system, including Earth. Nasa has said that SDO observations start in the interior of the Sun with the solar dynamo — the churning of the Sun’s interior that creates its magnetic field and drives space weather.

The spacecraft also observes the solar surface to directly measure the magnetic field and the solar atmosphere to understand how magnetic energy is linked to the interior and converted to space weather-causing events.