The Queen’s affidavit names her late husband Prince Philip, her parents King George and Queen Elizabeth the Queen Mother. But do you know what this unusual woman’s job is called?

Queen of Britain Elizabeth ll (Queen Elizabeth ll)’s death certificate (Death Certificate) was publicly released on Thursday, September 29, and the cause of her death was revealed. No matter who the deceased is, a certificate in his name will be issued to the family members by the concerned department, there is nothing special about it. But in the death certificate issued to the Queen, the mention under the title of occupation is undoubtedly special and unusual.

In the affidavit, the cause of the Queen’s death was given as old age in the relevant column and the death was mentioned as Thursday, September 8, at 3.10 pm. News of his death at Balmoral Castle was made public three hours later. The affidavit states that the Queen’s daughter, Princess Anne, revealed that her mother had passed away.

The Queen’s affidavit names her late husband Prince Philip, her parents King George and Queen Elizabeth the Queen Mother. But do you know what this unusual woman’s job is called?

It simply reads ‘Her Majesty The Queen’! 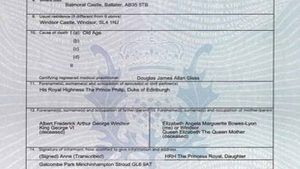 The Queen’s death was followed by 10 days of mourning in the United Kingdom. His last rites were held at Holyrood Palace in Edinburgh. Before that, her body was brought to London and when the coffin was placed in Westminster Hall for the public to pay their last respects, millions of people came in line to have their final darshan of their favorite queen and said goodbye in tears.

The Queen’s funeral took place on September 19 at Westminster Abbey in the presence of members of the royal family and several prominent foreign leaders. People gathered in the main streets of the city of London and said goodbye in tears. The Queen’s body was laid to rest in St George’s Chapel at Windsor Castle next to the grave of her late husband Prince Philip, who died in April 2021.