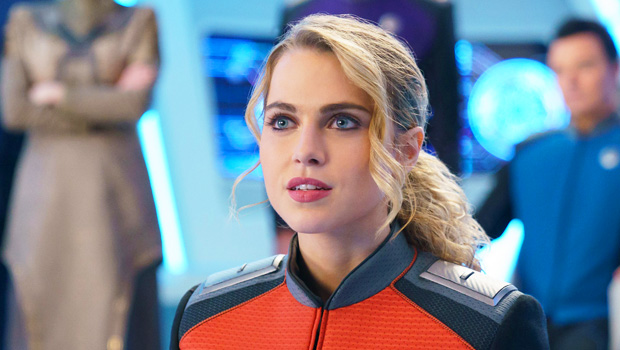 While many may recognized Anne Winters from her role as Chloë in 13 Reasons Why, the actress expanded her resume to take on the sci-fi genre in Hulu’s The Orville. Playing Charly Burke, the sassy young new navigator on The Orville, Anne was challenged to lean into the world of mathematics, space, and science while also diving into her character’s intense and dark back story. “I tried to do a bunch of research on even just the mathematics that Charly’s very well in tune with, like being able to visualize four-dimensionally. I was watching all of these YouTube videos, and I just got a glimpse of just some of the knowledge that she know,” Anne explained to HollwoodLife in an EXCLUSIVE interview.

However, it was balancing the human side of Charly with her tough exterior, not the super specific language and science, that posed the biggest challenge for Anne. “To even be given the opportunity to be on board the ship and have the responsibility that you’re given in this world, you have to have a bit of a tough skin, you have to really be able to not show every single emotion or be too emotional about things. So, finding that balance of still being human and having vulnerability, but also being tough and standing up for what she believes in and being that strong person that has to do her job, no matter what happens, no matter who she loses, no matter how bad it hurts, that was a most challenging part for me,” she said.

However, Anne added that with that challenge, was also where she found the most freedom and fun within her character. “In normal circumstances, even on 13 Reasons Why, or if you’re playing someone in high school, you go in with true intentions of just a personality, you don’t have all these prerequisite things, like being in space or all this training to already have a character that has all this knowledge. In this character, I was able to keep it together and handle the situations that were thrown at me,” she explained.

Anne also teased that she was “excited” for fans to see Charly’s arc and the developments in her storyline throughout the season. “There’s a lot of different changes and nuance to her throughout the season, especially with Isaac, she has a lot of interaction with him,” she gushed. “I’m excited for people to discover her vulnerabilities in different ways and see that she may project a certain thing at the front, but everybody has something behind what they’re projecting. So, I’m curious to see what the audience thinks about her journey and how she grows up.”

Natalie Portman In ‘Thor’: From Scientist & Love Interest To Superhero, Her Marvel Journey So Far