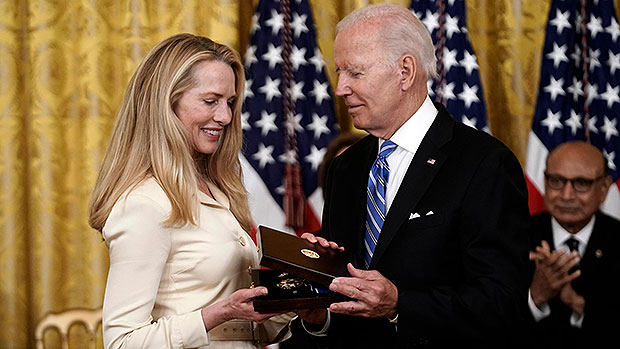 Laurene Powell Jobs accepted a Medal of Freedom on behalf of her late husband Steve Jobs. The award was presented by President Joe Biden at a ceremony on Thursday, July 7. Laurene, 58, was regal in a cream dress during the ceremony, smiling as she accepted the medal as Joe kissed her on the cheek. Just before the award was presented, the President could be seen holding Laurene’s hand as a female military officer, wearing all white, held the box with the award inside.

Per the White House’s release, the late Steve Jobs was being honored for “his vision, imagination and creativity led to inventions that have, and continue to, change the way the world communicates, as well as transforming the computer, music, film and wireless industries.” The Apple founder forever changed the trajectory of computer technology through the Mac, and later revolutionizing the mobile phone with the iPhone, and the music industry with the iPod and iTunes, among many other accomplishments.

Steve was survived by his wife of 20 years, Laurene, and their children Reed, 30, Erin, 26, and Eve, 23. Steve also is father to Lisa Brennan-Jobs, 44, with ex Chrisann Brennan.