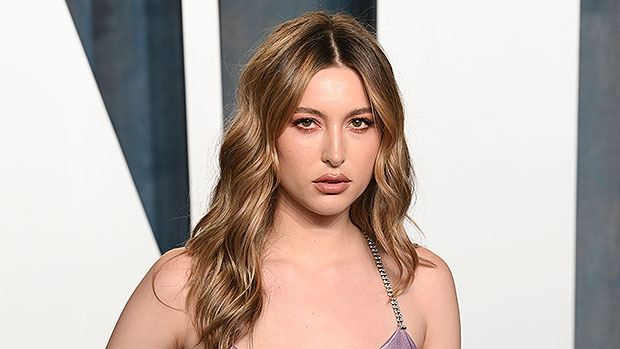 Eve Jobs continues to make her mark on the world of high fashion, and her latest cover is quite an eye-popper! The Apple heiress, 24, appeared on the October cover of Vogue Japan, looking every bit the posh beauty. In the cover shot, which you can SEE HERE, Eve rocked a sleek, super high ponytail — a look that hails back to Madonna‘s classic ponytail from Blonde Ambition days. She laid on the glam with classic, bright red lipstick and iridescent eye shadow. She went sans jewelry, opting instead for just a Louis Vuitton oversized graphic sweatshirt, which she pulled up to show off her toned legs.

The youngest daughter of the late, legendary Apple founder Steve Jobs signed with DNA Models back in March, cementing her own unique image, apart from her famous dad. “Now represented by @dnamodels,” she captioned a simple Polaroid shot via Instagram on March 7. The agency, also known for repping supermodels Kaia Gerber, and Alessandra Ambrosio took to their own newsletter to celebrate their illustrious new client, as well.

“DNA is thrilled to announce we are representing Eve Jobs,” they wrote. “The young Californian is an accomplished equestrian and Stanford graduate, and we are very excited to help her launch her auspicious modeling career.” Eve has also appeared in Vanity Fair in August, and Vogue in May.

“I’m a little weird,” she told Vanity Fair. Some people get a little taken aback by me: ‘I don’t know where to place her.’” Eve, an accomplished equestrian, does seem grounded in a strong sense of self, regardless of how others react to her. While she doesn’t have a lot to say via her stunning feed of Instagram photos, she did open up recently for a cause that matters to her.

In a July 13 post, she posed alongside a gorgeous artisan handbag, crafted in the shape of an elephant. “This wonderful @loewe Elephant Basket Bag has been created in collaboration with the #knotonmyplanet campaign,” she captioned the pic. “The eyes have been hand beaded by a female Samburu artisan collective of the @samburutrust in celebration of their beautiful renowned tradition of beadwork. 100% of the proceeds go to the @elephantcrisisfund.”