Police and security personnel have not taken any strict measures against the protesters but are constantly trying to deter them by firing tear gas shells, firing in the air, and conducting air patrolling.

Demonstrators sit around a meeting table at the office of Sri Lanka’s Prime Minister as they take over the building in Colombo on July 13. (AFP)

Here are the top developments around the Sri Lankan economic crisis:

1. Fearing for his and his family’s safety, Sri Lankan President Gotabaya Rajapaksa fled the country on Wednesday to Male in the Maldives.

2. Soon after Gotabaya’s departure, Speaker Mahinda Yapa Abeywardena appointed Prime Minister Ranil Wickremesinghe the acting President. However, this infuriated the protesters further and they stepped up their demand for a change in the government. Demonstrators inside the Sri Lankan Prime Minister’s office during an anti-government protest in Colombo on July 13. (AFP)

3. Protesters could be seen marching to Parliament and scaling the walls of the PM’s office. Efforts by cops to disperse them failed as they eventually took over the Prime Minister’s office.

4. Following this escalation in the agitation, Wickremesinghe declared a state of emergency in Sri Lanka and ordered the police to “do everything necessary to restore order”.

5. Amid the chaos, the political battle for supremacy was not absent. While Leader of the Opposition Sajith Premadasa called the government’s actions thus far “total anarchy”, acting President Ranil Wickremesinghe alleged that there was a “fascist threat” to the democracy in Sri Lanka. “We can’t let them tear up our Constitution, ” he said.

6. Meanwhile, protests broke out in the Maldives after the government allegedly “harboured” Rajapaksa. The protesters demanded that Maldives President Ibrahim Solih send Rajapaksa back to Sri Lanka. However, a Maldives government official said that Rajapaksa was only “transiting” there and would soon move on to a new destination. 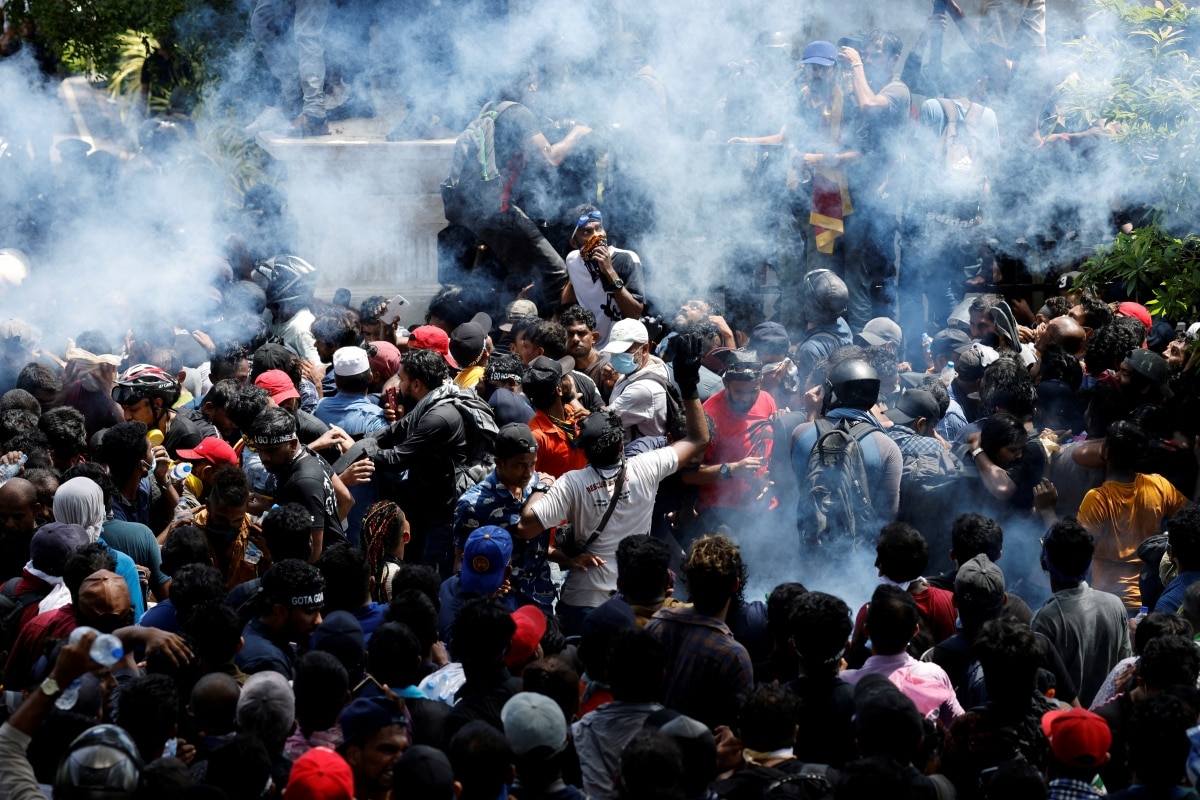 Demonstrators gather outside the office of Sri Lanka’s Prime Minister Ranil Wickremesinghe in Colombo, demanding his resignation, on July 13. (Reuters)

7. Security was boosted at the Maldives airport on Wednesday night after Sri Lankan President Gotabaya Rajapaksa reportedly sought clearance to fly to Singapore, which is likely to be his final destination. However, he did not fly out on Wednesday and could make a move on Thursday.

8. US Ambassador to Sri Lanka Julie Chung on Wednesday urged Sri Lanka’s political fraternity to ensure a peaceful transfer of power and called for the rule of law to be upheld in the crisis-hit island nation. India’s Foreign Minister S Jaishankar said it is closely monitoring the situation in the island nation but would not interfere in the country’s affairs.

(2/2) We condemn all violence & call for the rule of law to be upheld. A peaceful transfer of power within SL’s democratic & constitutional framework is essential so the people’s demands for accountability, transparency, democratic governance & a better future can be realized.

9. Protests will continue in the tiny island nation on Thursday as neither President Gotabaya Rajapaksa nor Prime Minister Ranil Wickremesinghe has stepped down.

10. A new President is likely to be elected on July 20, the nominations for which will be filed on July 19.