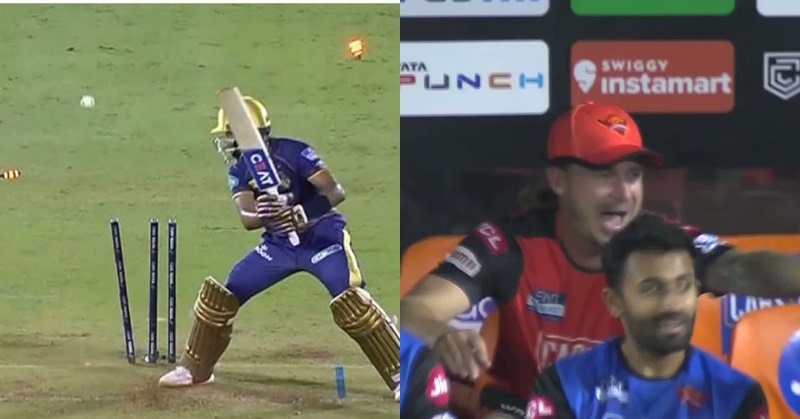 Umran Malik picked up 2 for 27 against KKR including the big wicket of Kolkata Knight Riders skipper Shreyas Iyer for 28. Iyer showed him all the stumps a ball before and Malik was clever enough to dart in an unplayable yorker which rattled his stumps and ended his innings.

Umran Malik’s pace has been the highlight of the season so far and his performance against KKR was evidence of the same. After cleaning up Shreyas Iyer, Malik bowled an over to Andre Russell at the death giving just one run from it. He bowled the over with pace and good control which surprised the KKR all-rounder.

After the game, SRH head coach Tom Moody explained the reason behind Dale Steyn’s celebrations after Malik bowled that yorker to Iyer. Steyn jumped up in joy and was seen hugging SRH spin bowling coach Muttiah Muralitharan. The footage became instantly viral on social media as praises for Malik came from all corners.

“There is a lot of planning that goes on with any sort of match-up against any opponent. I think the emotion that was shown in the dug-out was about the joy for a young fast bowler getting such an important wicket for us,” Moody said.

Moddy further explained what the team exactly desires from Umran Malik. He said that the youngster will go for runs given that he bowls fast but then the management wants him to intimidate the batsmen which in turn will bring wickets as well.

“At the end of the day, when you are bowling 150 kph an hour, you are likely to go for runs. He goes for a lot of runs behind the wicket. It’s not like he is getting smashed down the ground or through the covers. So you got to accept that his style of bowling, there’s going to be a higher economy to that. And his role is to run in and express himself and be himself. We try and build a field around that so that he can express his fast bowler” the SRH head coach said.

He further said that Malik’s journey has just started and under Dale Steyn’s guidance he will only improve. Moody said that they are okay with the pacer going for runs as he wants him to take wickets.

“He is clearly still at the beginning of his journey. He is learning every single day and having the likes of Dale Steyn around him is a huge boost because he is learning so much on the go. We accept he is going to go for runs, what we want to see is the return in terms of wickets,” Moody added.

SRH have now won three matches on the trot after losing their opening two games of IPL 2022.