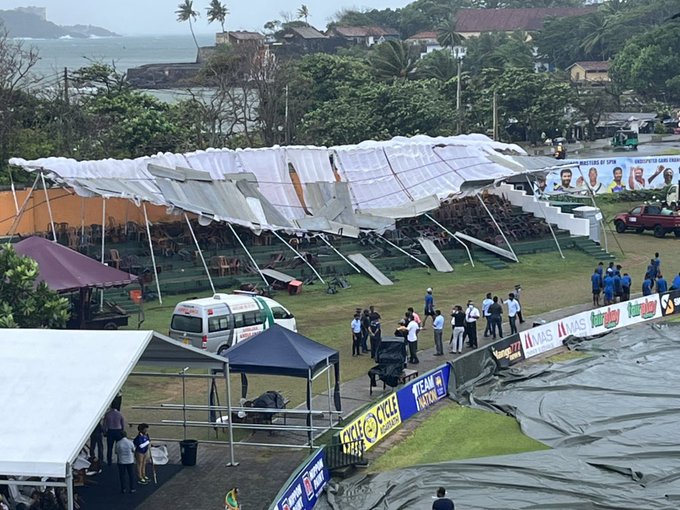 Untamed weather in Galle delayed the second day’s play of the first Test between Sri Lanka and Australia on Thursday. A temporary stand collapsed at the Galle International Stadium and the corrugated iron of the stand was completely destroyed.

According to a News Corp report, there was no one in the three-tiered structure, which was full on the opening day of the Test match. As per a report by news agency Australian Associated Press, a glass panel fell and smashed in front of a marquee where tour groups had been seated on day one.

The heavy rain showers started overnight in Galle and continued till Thursday morning as the play was scheduled to start at 10 am (IST). At 11:34 am (IST), Cricbuzz’s live blog for the Sri Lanka-Australia first Test mentioned that no play is expected to take place before lunch.

Australia finished Day 1 with 98 for three wickets down as David Warner (25), Marnus Labuschagne (13) and Steve Smith (6) returned back to the hut in the final session. Opener Usman Khawaja continued his brilliant run in the subcontinent remaining unbeaten on 47 in 86 balls with five fours.

Travis Head, who recovered quickly from a hamstring injury to be available for the first Test, will resume the play with six runs alongside Khawaja.

Sri Lanka were bowled out for 212 in 59 overs as Nathan Lyon (5/90) bagged his 20th five-wicket haul in Test cricket. Sri Lanka wicketkeeper-batter Niroshan Dickwella was the top run-scorer for the hosts (58) in another batting failure by the Dimuth Karunaratne-led team.

Senior all-rounder Angelo Mathews was watchful during his 71-ball 39 but a sharp off-breaker from Lyon ended the former skipper’s resistance on a turning track in Galle. Ramesh Mendis (22) was involved in a 54-run stand with Dickwella, the highest for Sri Lanka in the first innings.