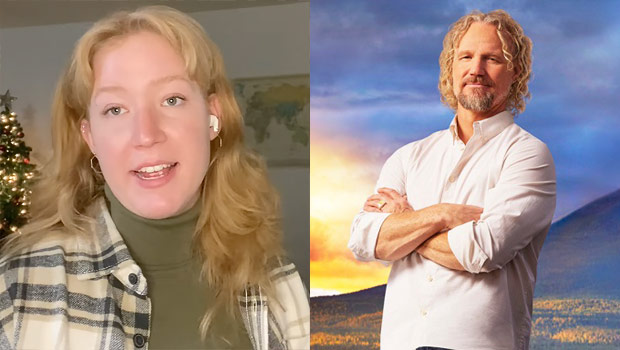 Sister Wives star Gwendlyn Brown, 21, shut down the rumor that her father, Kody Brown, 53, made out with his 19-year-old stepdaughter Aurora Brown. Gwendlyn, who is the daughter of Kody and Christine Brown, 50, was asked about this rumor by a fan on her Jan. 11 YouTube recap of a recent Sister Wives episode. “This is such a funny question. And horrifying,” said Gwendlyn, who was shocked that a fan asked if the photos circulating online that allegedly show Kody kissing Aurora, who is Robyn Brown‘s daughter from a past relationship, are real.

But Gwendlyn cleared everything up and insisted that the photos are fake.

“No, my father does not kiss his children like that,” Gwendlyn explained. “Like obviously as kids we give him a little smooch because we’re children, but no, not at all. I’m so sorry you were tricked to thinking that. That’s horrifying. And I apologize for you [the fan]. And I’m sorry.”

Aurora is Robyn and her ex David Jessop‘s child, who was legally adopted by Kody when he married her mother in 2014. Aurora’s siblings, David and Breanna, were also adopted by Kody. Robyn is currently Kody’s only wife, following his splits from Christine, Janelle Brown, 53, and Meri Brown, 51.

Christine and Kody’s split was the main storyline in season 17 of their reality show. Christine decided to move away from the polygamous family in Arizona to live in Utah. Christine’s children, including Gwendlyn, have been so supportive of her decision to divorce Kody. Meanwhile, Janelle confirmed her split from Kody during the Sister Wives one-on-one special. Janelle said she’s “really happy” after the end of her 30-year marriage. During another part of the special, Meri, who married Kody in 1990, confirmed that he’s “decided” that they’re “not married” anymore.

Kody has eighteen children with his current wife and his three ex-spouses. He and Robyn, who legally became his wife in 2014, have kept a low profile amidst all this ongoing family drama.

Kody Brown’s Wives: Meet All The Women He’s Married Over The Years