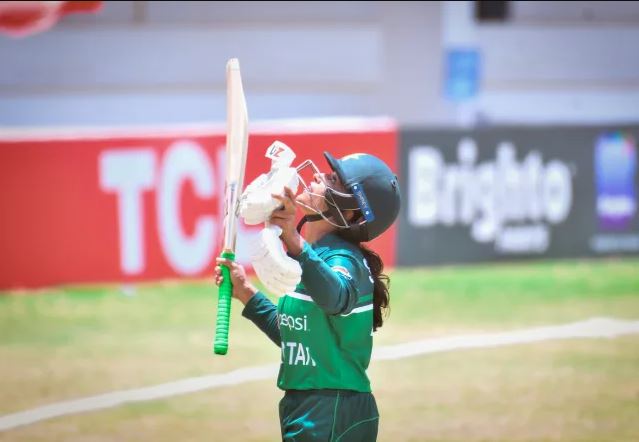 Sidra Ameen, the Pakistan veteran, has made a huge leap up the MRF Tyres Women’s ODI Batting Rankings after a fantastic series with the bat against Sri Lanka.

Sidra was the largest mover in the ICC Women’s Player Rankings on Tuesday, thanks to her 218 runs at an average of 72.66 in the three-match ODI series against Sri Lanka.

Sidra surged 19 places to 35th overall in the batter rankings, with the 30-year-old making a significant improvement owing to a century and a half-century in Karachi.

Other Movements In Women’s Rankings

It caps off a great start to the year for Sidra, who struck a stunning 104 against Bangladesh in New Zealand in March to become the first Pakistani woman to hit a century in the history of the ICC Women’s Cricket World Cup. Chamari Athapaththu, Sri Lanka’s captain, hit a century in the second ODI and totalled 142 runs in the three ODIs. She is now ranked No. 23 in the world.

Lewis has 83 runs in the first two games of the three-game T20I series, and her performance has been rewarded with a jump in the rankings.

Tazmin Brits (up to three spaces to 36th) and Chloe Tryon (up to four spots to equal 49th) from South Africa both improved their ranks, while right-armer Nadine de Klerk jumped eight spots to equal 25th in the all-rounder standings.