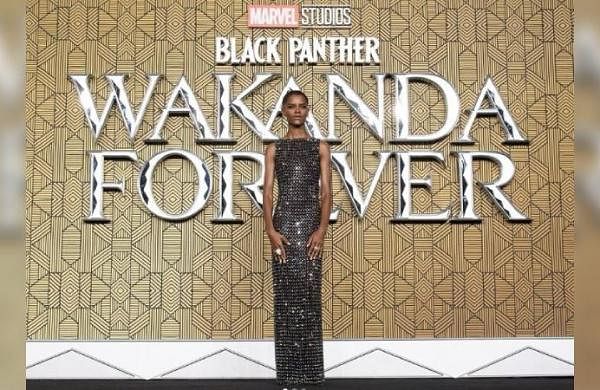 The much-anticipated sequel to the 2018 blockbuster “Black Panther” explores the aftermath of Wakanda’s loss of its beloved king T’Challa, a change introduced in the script following lead star Chadwick Boseman’s sudden death from colon cancer in August 2020.

Wright reprises her fan-favourite character of Shuri, a brilliant tech wiz and princess of the fictional country of Wakanda, from the Marvel Cinematic Universe (MCU).

“When performing, in so many ways Shuri and I share a parallel of emotions in this film. We’re both dealing with something that has broken our hearts in ways that were very painful,” the Guyanese-British actor said.

“But we see the ways in which Shuri, she literally has to bite away at the things that are hurting her. So, she does that and we see how grief turns into strength,” she added.

The actor said the film, set to arrive in the theatres on Friday, will see Shuri understand herself better as she deals with the death of her brother T’Challa.

“We definitely explore the ways in which she’s dealing with her emotions. She’s facing things that are really challenging for her. So, we see how she develops and expands. She is trying to understand herself and her emotions. We see how everybody is trying to gather around her to support her at this time.”

Acclaimed filmmaker Ryan Coogler, who helmed the first movie, has directed the sequel as well. The first “Black Panther” movie was a huge global hit and raised USD 1.3 billion worldwide.

The film was nominated in seven categories at the 91st Academy Awards and was also the first superhero movie to earn a best picture nomination.

When it comes to dealing with fans’ expectations, Wright said the team has tried to make a beautiful art piece that is “positive and encouraging”.

“The ways in which we handle expectations is just by focusing on what we’re making. We’re just focusing on the script and telling the story. When we release, the art belongs to the people. So, we just want to release something that we feel is beautiful, positive and encouraging.”

“Black Panther” has been credited by many for introducing the richness of the African diaspora to the world audience.

Backed by Disney-owned Marvel Studios, it was the first superhero film to feature a predominantly Black cast.

According to Wright, the film brought African tales to the forefront, leading to more stories being mined out of the continent.

“I would like to think that ‘Black Panther’ definitely opened up our eyes to see the richness of the African diaspora and the richness of stories with African people at the centre, and how successful it can be, how innovative and impactful it can be. I feel like that has definitely led on for other films and other projects to be appreciated and celebrated in ways that maybe it wouldn’t have back in the day,” she said.

Following Boseman’s demise, there were speculations about Wright taking over the role of titular superhero Black Panther in the sequel.

But the actor refrained from giving out any details about her character’s arc in the new movie.

“That is a loaded question that I don’t know how to answer because I don’t know what you’re talking about,” she responded to the question of her leading Wakanda. The film was also an opportunity for the 29-year-old star to honour Boseman.

Wright described the relationship between Shuri and Riri as that of two “geniuses” who make a great team.

“Ironheart is a beautiful introduction to Riri Williams’ character. She is innovative and smart and the relationship between Riri and Shuri is one of just two geniuses trying to connect. The ways in which they connect are very special for us to see. I love it. They just have this combined personality that’s so beautiful. They make for a great team.”

Coogler and Joe Robert Cole have penned the screenplay of “Wakanda Forever”, which is produced by Kevin Feige and Nate Moore. David J. Grant is the co-producer. Louis D’Esposito, Victoria Alonso and Barry Waldman are executive producers.