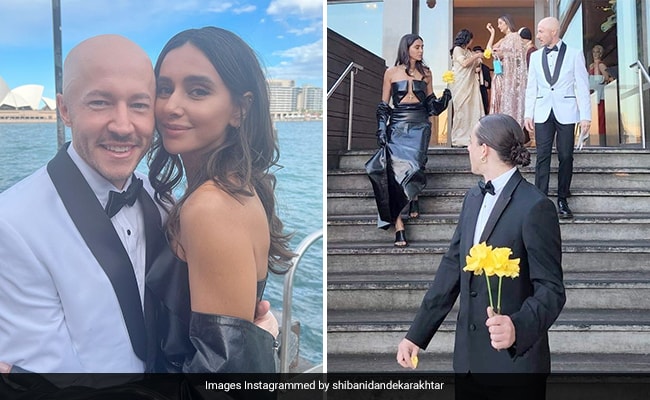 Shibani Dandekar was busy with the “best lady” duties at her friend Joel Peisley’s wedding in Sydney, Australia. Shibani shared picture-perfect moments from her friend’s wedding. In one of the pictures, Shibani can be seen posing with the grooms Joel Peisley and Sean Byrnes. The picture also features Shibani’s sister VJ Anusha. Shibani captioned the post: “Here’s to the most beautiful couple I know, to you and your love and the lifetime of memories you will create together. May your dance of life be filled with love, fun friendship and many many buckets of KFC love you both so much Joel Peisley and Sean Byrnes.”

Sharing this candid shot, the actress wrote: “Moments before their forever after.”

“Promise me ill get to forever be your best lady! It was an honour. Love you so much,” Shibani wrote. Also, don’t miss the Sydney Opera House in the backdrop.

Anusha Dandekar also shared a picture from her friend’s wedding and she wrote: “Congratulations to the man with the kindest soul, purest heart, my big brother through it all, incredible and beautiful, Joel… my heart is so full and happy for you. You deserve all the love, always.”

Shibani Dandekar, who married Farhan Akhtar in February this year, became a household name after she started hosting Indian Premiere League. She has participated in reality shows such as Khatron Ke Khiladi and Jhalak Dikhla Jaa. Shibani was also seen in the second season of Amazon Prime Video’s web-series Four More Shots Please! .

Anusha Dandekar stepped into the Indian entertainment industry with the TV show MTV Dance Crew. Anusha has hosted popular shows like Teen Diva, India’s Next Top Model, Rock On, Love School, among others. She was last seen as a host and mentor in the TV reality show MTV Supermodel Of The Year 2, which featured Malaika Arora, Milind Soman. She has also been a part of films like Delhi Belly, Viruddh , Mumbai Matinee and Anthony Kaun Hai, to name a few.