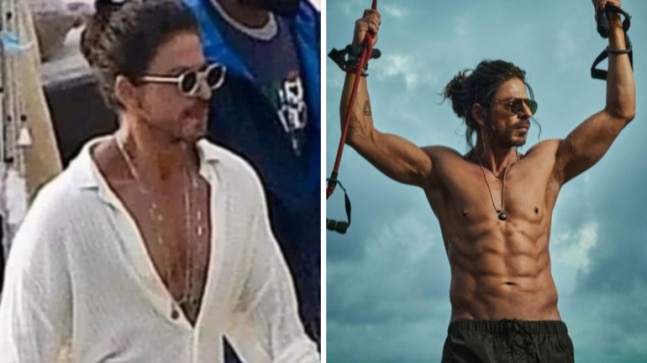 A photo of Shah Rukh Khan from Pathaan sets is going viral on the web. The film will release on January 25, 2023.

Every time a photo of Shah Rukh Khan from Pathaan sets goes viral, our heart skips a beat! The Bollywood superstar will break his three-year hiatus from films with his first project of 2023, Pathaan. While SRK had dropped his first look from the flick a while back, yet another photo of him looking super-hot from Pathaan sets is creating waves on social media!

Shah Rukh Khan’s first release of 2023 is going to be Pathaan and how excited are we! Several photos of the superstar from the film’s sets have time and again leaked on social media and gone viral instantly. And history repeats itself yet again! On June 30, a photo of Shah Rukh Khan in white, sporting a man bun and beard has gone viral on social media. Wearing sunnies and flaunting his chiselled physique in a V-neck collared shirt, SRK’s latest viral photo is too hot to miss! What appears from his getup, the photo is a BTS from Pathaan sets.

Here is the photo:

Shah Rukh Khan was last seen in the 2018 film Zero opposite Katrina Kaif and Anushka Sharma. The Bollywood superstar will break his three-year hiatus from films with three releases in 2023. First up is Pathaan, which releases on January 25, 2022. Atlee-directorial Jawan will hit the theatres on June 2, 2023, and Dunki will see the light of the day on December 22, 2023.