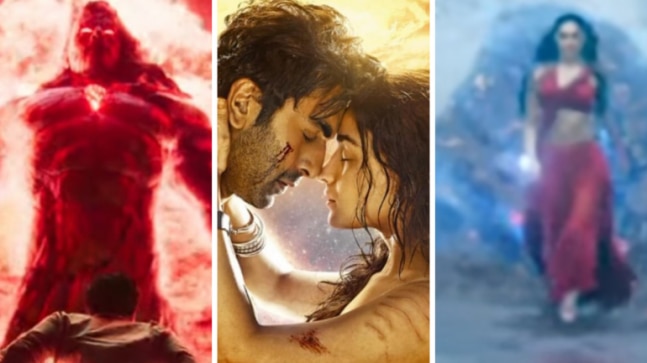 Action sequences, Hollywood-level VFX, Ranbir Kapoor, Alia Bhatt, Amitabh Bachchan, Nagarjuna, Mouni Roy – you name it and you’ll have it all in Brahmastra! The Ayan Mukerji directorial hits the theatres on September 9, and fans are finding the wait difficult. Twitter feels Brahmastra is going to be a one-of-a-kind film. Ayan has gone all out to finally breathe life into his dream project after devoting five years of his life.

SHAH RUKH KHAN AS VAYU IN THE TRAILER

The teaser of Brahmastra was enough for fans to begin a discussion on Shah Rukh Khan’s cameo in the film. While many said SRK will star as Vayu others felt he might be seen as Hanuman. Yet another section of Twitteratis felt SRK is the unidentified man in front of a mountain, flaunting eight-pack abs, holding a trishul. In fact, they also seem to have spotted Shah Rukh Khan in the trailer, but again, the Internet is divided. Karan Johar, however, had once shared in an interview that SRK plays a scientist in the project. What is Shah Rukh Khan’s role at all? Here are some of the most popular fan tweets:

Yaar if this guy is really SRK then i don’t think he will have a major role in the upcoming parts of Brahmastra.

After Shah Rukh Khan, fans are convinced they saw Deepika Padukone as Goddess Jal Devi in Brahmastra trailer. They believe they spotted Deepika wearing a red attire, hair open and blue energy twirling out of her hands. Some are already imagining Deepika’s entry with Amitabh Bachchan’s voice in the backdrop. With a high tide behind her, fans are sure Deepika is a part of the project. While the next shot is a close-up of Mouni Roy, it will rather be interesting to see if this fan prophecy indeed stands true. Also, Deepika and Ayan have previously worked together in Yeh Jawaani Hai Deewani.

While 2nd pic is of Mouny Roy (carries a red stone) pic.twitter.com/lBdl7qfj4N

I am already imagine deepika’s entry in #Brahmastra in Amitabh Bachchan’s voice. Describing her and her powers. Her poised and powerful walk with mass bgm and those waves and her red attire #DeepikaPadukone

BRAHMASTRA IS A SCI-FI SUPERHERO FILM

Ever since Brahmastra’s teaser released, fans have been comparing the film’s VFX to that of The Avengers. They’ve posted screenshots of several similar-looking scenes from popular Hollywood superhero projects with that of Brahmastra and we can bet that you won’t be able to tell the difference. And thus began fan theories that Brahmastra is a Bollywood sci-fi project. However, Alia had dismissed the fan theories and told Vogue, “It’s my most action-heavy film but it’s a different kind of organic action, not dishoom-dishoom.” Further adding, “If you call it that, then people will imagine us running around the city in red underwear.”

The VFX is so amazing it’s look like #Marvel & #dc movie If this movie performs well then we will get to see universe like #DCEU and #MCU#BrahmastraTrailer #Brahmastra pic.twitter.com/nAFR1bcnLG

Literally the CGI and VFX is really amazing compare to #Marvel and #DC movie This movie is on his level I am very desperate to see whether this movie has really been able to do its job properly or not. #BrahmastraTrailer #Brahmastra pic.twitter.com/NgZo8Qnw7s

reflection of tail shown on the glass … the Detailing #brahmastra pic.twitter.com/wrDGODlmfP

FIGHT SCENE BETWEEN NANDI AND MAHISHASURA

Lord Shiva’s vahana (vehicle) is Nandi (a bull). A scene in the trailer shows Shiva’s (Ranbir Kapoor) intense fight scene with what fans claim to be Mahishasura. They’ve posted individual screenshots of the fight sequence on Twitter where a flaming red buffalo marches towards him. This is what a fan said about the scene, “Can there be a fight scene between Nandi and Mahisasur. That will be awesome. Deity vs Demon. Bull vs Buffalo (sic).”

Can there be a fight scene between Nandi and Mahisasur. That will be awesome. Deity vs Demon. Bull vs Buffalo.#Brahmastra #RanbirKapoor #AliaBhatt #Nagarjuna pic.twitter.com/nSlHY9UaGV