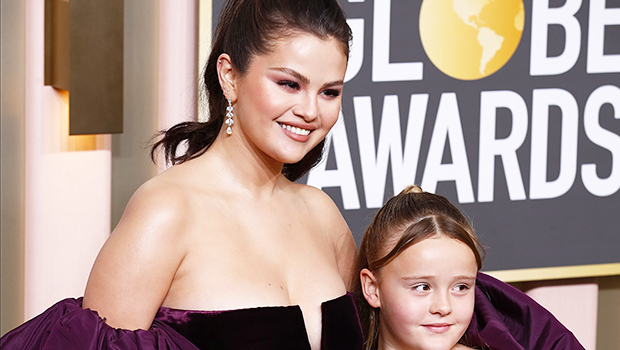 Selena Gomez, 30, brought one of the closest people to her as her date to the 2023 Golden Globe Awards: her little sister Gracie! The singer and actress posed on the red carpet of the event with the nine-year-old as they smiled and flaunted their pretty dresses. Selena wore a dark purple velvet Valentino dress with lighter purple puffy sleeves that started past her shoulders and at the middle of her upper arms, and Gracie wore a silver and white dress with spaghetti straps.

Both siblings had their long hair pulled up in high ponytails and Selena added dangling earrings to her look. Gracie carried a gold sequined purse as well as her phone. They flashed smiles as cameras captured their bond and were two of the most memorable guests on the carpet of the big award show.

When Selena wasn’t posing with Gracie, she was posing on her own. She looked confident and happy as she went to the event to honor her Hulu series, Only Murders in the Building, and her nomination in the Best Performance by an Actress in a Television Series – Musical or Comedy category. She expressed her excitement about the nomination in a TikTok video with makeup artist and influencer Mikayla Nogueira.

“Oh my god. I’m so excited,” she said in the clip. “I didn’t think I was gonna get — actually, I know I wasn’t gonna get nominated, or I thought. But I’m happy.”

Although Selena didn’t end up winning the big award, the nomination proved her effort and talent hasn’t gone unnoticed. Quinton Brunson from Abbott Elementary was named the big winner, beating out other nominees like Jean Smart, Jenna Ortega, and Kaley Cuoco. In addition to Selena, her Only Murders in the Building co-stars, Steve Martin and Martin Short were nominated for Best Actor in a Television Series Comedy or Musical. The show itself was also nominated in the Best Television Series Comedy or Musical category.