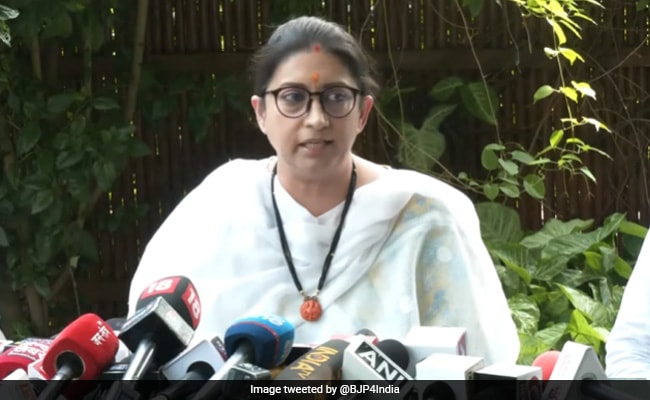 Union Minister Smriti Irani, under attack from Congress over an alleged “illegal bar” being run in Goa by her 18-year-old daughter, has hit back saying her daughter’s fault is that her mother holds press conferences on “the loot of Rs 5,000 crore by Sonia and Rahul Gandhi”. She asserted her daughter is a first-year college student and does not run any bar.

The Enforcement Directorate is questioning the Gandhis in relation to a money laundering case linked to National Herald. Ms Irani had last month addressed a press conference accusing the Congress of trying to protect “illegal properties worth over Rs 2,000 crore” owned by the Gandhi family when they protested the probe agency’s questioning of Rahul Gandhi.

The Congress “assassinated” and “publicly mutilated” her daughter’s character, Ms Irani said in a press conference and dared the Opposition party to show proof of any wrongdoing. Denying the allegation, she said she will seek answers “in the court of law, and the court of people”.

She also dared Rahul Gandhi to fight from the Amethi Lok Sabha seat again in 2024. “I promise he will lose again,” she said.

In a statement, the lawyer of Smriti Irani’s daughter, Kirat Nagra, has said his client is neither an owner nor operating the restaurant called Silly Souls Goa and has not received any show cause notice from any authority whatsoever as alleged.

Kirat Nagra said various “erroneous, frivolous, malicious and defamatory social media posts being made by various vested quarters trying to settle political scores with our client’s mother, the renowned politician Smriti Irani each of which are predicated on blatant falsities”.

Terming the charges “baseless”, the lawyer said, “It is unfortunate that they have resorted to spreading false propaganda only to sensationalise a non-issue without ascertaining true facts and with a predetermined objective of defaming our client for solely being the daughter of a political leader.”

Noting that it is a “very serious issue”, Congress also shared a copy of the show cause notice given to the bar and alleged that the excise official who gave the notice is reportedly being transferred after pressure from authorities. Party spokesperson Pawan Khera has claimed that the license for the bar has been taken in the name of a person who has been dead for over a year.

Narayan Gad, Excise Commissioner of Goa, on July 21 issued a show-cause notice to the restaurant after receiving a complaint from lawyer and activist Aires Rodrigues. Mr Rodrigues says that the owners had submitted “fraudulent and fabricated documents” to get the licence.

He has also alleged that the BJP government in Goa has initiated the process to transfer the Excise Commissioner after the notice was issued.

Responding to Ms Irani’s press conference, Mr Rodrigues said that “the whole world knows that this upmarket ‘Silly Souls Cafe and Bar’ is managed and run by Union Minister for Women and Child Development Smriti Irani’s family at Bhouta Vaddo in Assagao Village at Goa, and there is enough evidence to this effect”.

He further said that at the hearing regarding the notice on July 29, “we would know about the ghost who runs the show”. He also claimed that Smriti Irani’s family owns other prime properties in Goa which should be investigated by probe agencies.