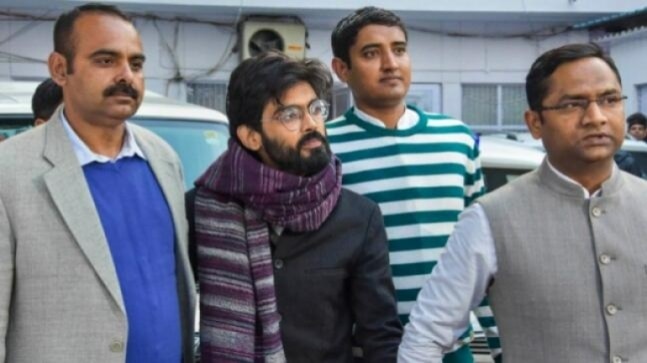 Former JNU student Sharjeel Imam was denied bail by a Delhi court this afternoon in a case related to speeches he had allegedly made at Jamia Milia Islamia University, the Aligarh Muslim University, Gaya and in Asansol.

Imam had sought interim bail citing the Supreme Court’s verdict issuing a stay on all trials of sedition cases related to an alleged conspiracy behind the 2020 northeast Delhi riots.

During the hearing, Imam’s counsel, Ahmad Ibrahim, told the court that the accused met the conditions for bail and he was not a flight risk, nor at the risk of influencing witnesses or tampering with the evidence. Imam did not make a conscious call to incite violent activities, he added.

Special Public Prosecutor Amit Prasad opposed the bail plea and said the court could consider the gravity of the offence before granting bail.

Sharjeel Imam had recently alleged that the assistant superintendent of Tihar Jail, along with nearly 10 people, had assaulted him in his cell on June 30. He was reportedly called a terrorist and a traitor by them. Imam argued that it was illegal to use such words for him without the allegations being proved.

This matter will now be heard on August 1.

Imam is accused of making inflammatory speeches against the government on the Citizenship (Amendment) Act and the National Register of Citizens (NRC), particularly at the Jamia Milia Islamia University in December 2019, which allegedly led to violence in the area outside the university.

Imam, also facing sedition charges for his alleged inflammatory speeches, has been in judicial custody since January 2020.

The Delhi Police have filed a charge sheet against Imam in the case, in which it has been alleged that he gave speeches inciting hatred, contempt, and disaffection towards the Central government and instigated people, which led to the violence in December 2019.

(With input from PTI)