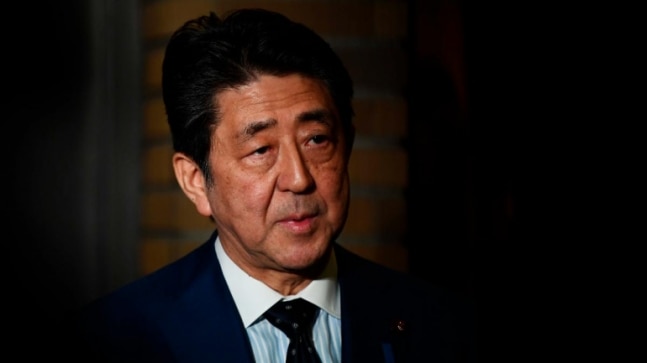 Even as Asia woke up to the news of former Japanese Prime Minister Shinzo Abe being shot at and the other side of the world keenly following the shocking news, Chinese social media users were up to their usual self of mocking the loss of its “enemy”!

Mr Abe was speaking at an election campaign in the city of Nara when he was shot at twice causing him to fall to the ground. Reports say his attacker has since been arrested.

The Ex-Tokyo governor, Mr Yoichi Masuzoe, tweeted that Mr Abe was in a state of “cardiopulmonary arrest” which is often the term used before death is officially confirmed in the country of Japan.

Mr Abe did have a team of security police with him. But it appears the shooter was still able to get to within a few meters of Mr Abe without any sort of check, or barrier. The shooting of such a prominent figure is profoundly shocking in a country that prides itself on being so safe.

While this situation was developing, the Chinese social media, which includes Weibo and WeChat was buzzing with this news and a lot of unsavoury and ill-timed jokes and jibes were taken at the incident.

Many users were seen to be celebrating the incident while some were referring to the missing of the July 7th anniversary of the Marco Polo Bridge Incident which marked Japan’s full-scale invasion of China in 1937. Some also compared this with the Kennedy assassination and made crass memes about the same. 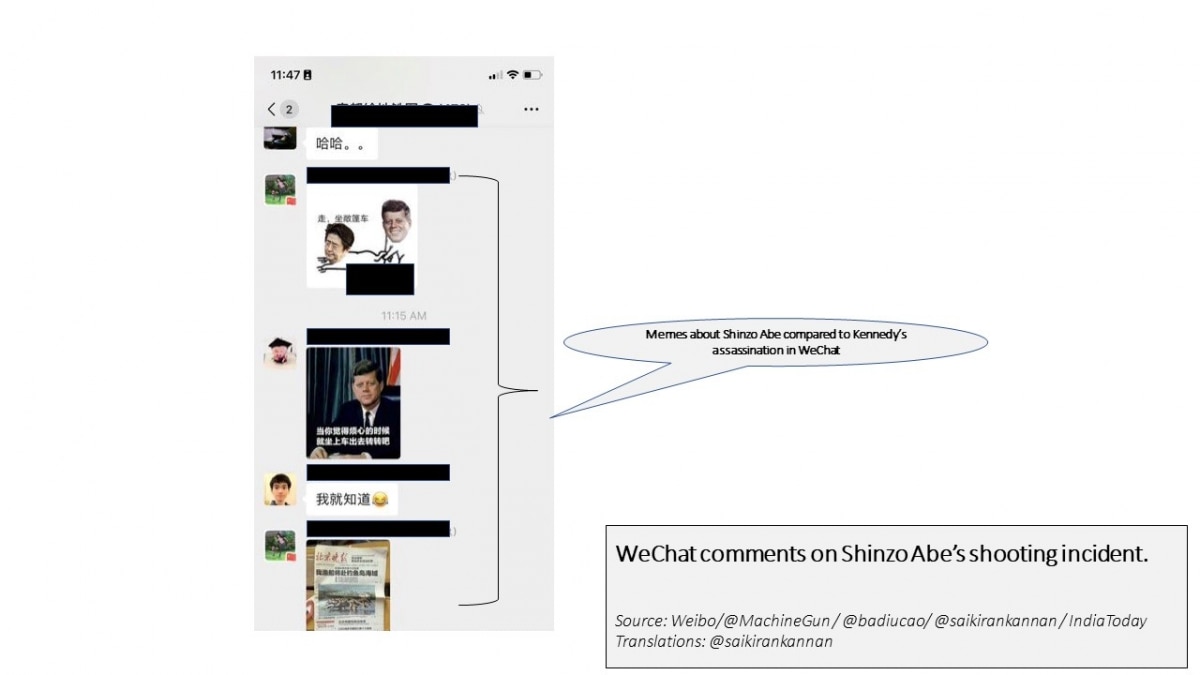 Japan and China have a long history in terms of wars and rivalry. The enmity between these two countries emanated from the history of the Japanese war and the imperialism and maritime disputes in the East China Sea. Thus, as much as these two nations are close business partners, there is an undercurrent of tension, which the leaders from both sides often try to quell.

Be it in sports or in technology, both nations often vie for glory when they come head-to-head. The world war was the first event that brought out this rivalry. The recent issues in the South China sea are also a testament to the cold war between the two nations.

Former Prime Minister Shinzo Abe was not a very liked man in China owing to his proximity with India and Taiwan, and because he is said to have initiated the QUAD that comprises Australia, the USA, India, and Japan.

He was also known to be a very good friend of Indian Prime minister Narendra Modi, as their friendship goes back to Modi’s days as the Gujarat Chief Minister.

Many comments and posts on WeChat and Weibo celebrated this shocking incident, and it truly depicts the hard feelings that the Chinese have towards Japan and its political spectrum, especially Mr. Shinzo Abe. 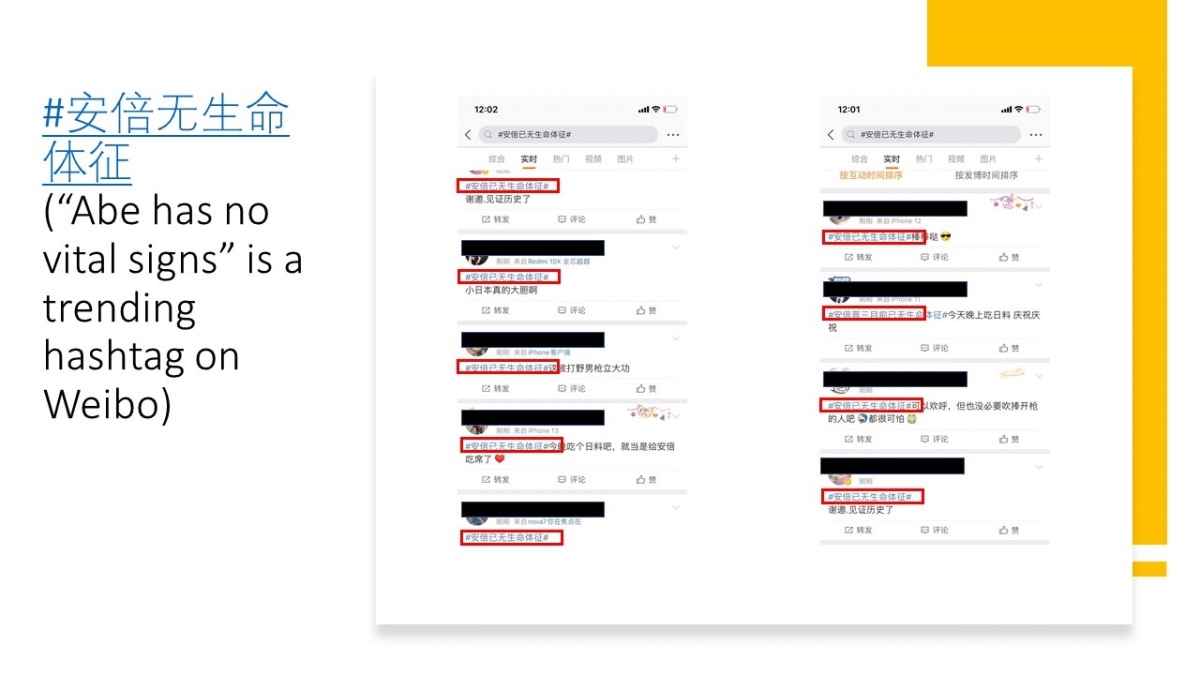 There was an even a trending hashtag “#” which when translated means “Abe has no vital signs”. The deplorable part was that this hashtag was used to comment badly on the former Japanese Prime Minister. Some comments also wanted the present Prime Minister and his Korean counterpart to get assassinated in a similar fashion. Some users wanted to congratulate and reward the apprehended shooter while others wanted to celebrate this by having an extra bowl of rice. 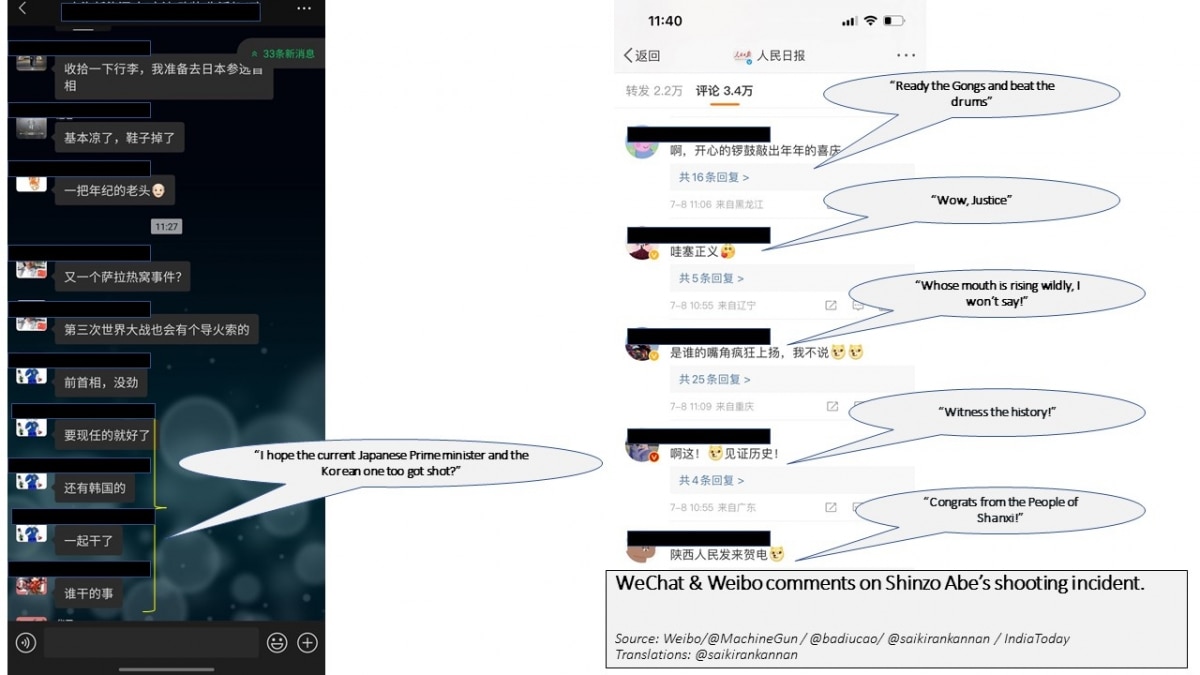 A few users commented on the ill effects of the Americanization of Japan and blamed the same for today’s shocking incident. Some also hailed the shooter as an “Anti-Japanese Hero”.

Mr Abe was Japan’s longest-serving prime minister and served his country from 2006-07 and then again from 2012 to 2020. He stepped down in 2020 owing to health reasons. He was diagnosed with a relapse of ulcerative colitis.

He strengthened Japan with respect to defence and foreign policy and tried amending Japan’s pacifist post-war constitution. His form of managing the economy, reforms and finances was popularly called “Abenomics”.