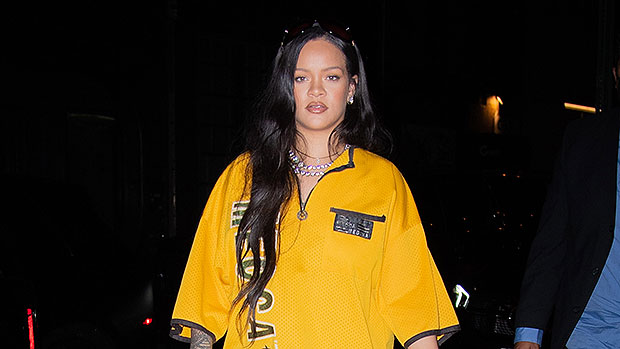 Rihanna, 34, was spotted on the way to a recording studio in New York City on Sept. 21. That night, the Fenty Beauty founder’s jet-black tresses were also looking longer than ever as they draped down her body during the outing. Her extra-long locks were parted down the middle and accessorized with her black sunglasses on top of her head. The beauty opted with placing one-half of her tresses in front of her shoulder while the other half flowed behind her.

Riri was also seen rocking an oversized vintage yellow jersey from Mecca Medina and a pair of baggy black jeans. She was clearly in full-vintage mode since she carried an adorable retro Dior velvet purse, which resells for over $4,000, according to The Daily Mail. The “Diamonds” singer completed her fashionable look with a pair of raven-hued fuzzy open-toe heels. And of course, Rihanna never forgets her jewelry! The Savage X Fenty designer wore several gold chain necklaces, diamond stud earrings, and a slim gold bracelet. Finally, the mom-of-one opted for minimal makeup for the evening with a brown shiny lip and gold-toned blush.

The stylish NYC recording visit comes just one week after Riri and her boyfriend, A$AP Rocky, 33, were both spotted at a recording studio in Los Angeles. And three days later, the power couple was inspired to jam out together for a third time in the same city! The handful or recording sessions are sure to create even more anticipation for new music from Rihanna, as it has now been six years since the Grammy-winner released her album, Anti!

Back in July, a source close to Rihanna told HollywoodLife EXCLUSIVELY that her upcoming album is on the back burner as she prioritizes her family. “Rihanna has total control over when she releases her music, she’s not in a position that a lot of artists get in where the label is pressuring her [she runs her own imprint under Roc Nation] she calls the shots and she’s very clear that until she feels ready nothing is coming out,” the insider said.

Aside from music, the Barbados native has been busy in recent months adjusting to being a new mother. She and A$AP Rocky welcomed their first child together on May 13, which TMZ reported is a baby boy. A photo of her new child has not yet been released, but many expect the kiddo to be as beautiful as their parents. And when she is not working on new music or spending time with her newborn, Rihanna is busy running several of her businesses. The billionaire is the founder of her own makeup line Fenty Beauty, and a lingerie line called Savage x Fenty. Her success with these two ventures have resulted in Rihanna officially becoming a billionaire as of Aug. 2020, according to Forbes.

Rihanna’s Romantic History: From Chris Brown To Her Baby With A$AP Rocky & More