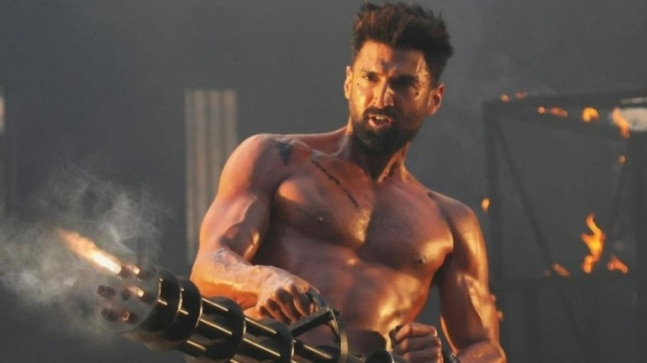 Rashtra Kavach Om released in the theatres on July 1. The Aditya Roy Kapur-starrer has failed to impress the audience.

Rashtra Kavach Om, starring Aditya Roy Kapur and Sanjana Sanghi, opened to low box office numbers. After its poor first weekend, the film showed drastic falls on a day-to-day basis. The film lost its major chunk of screens on Day 7, July 7 with the release of Thor: Love and Thunder and will lose its remaining screens to Khuda Haafiz: Agni Pariksha on Day 8, July 8. It also faced a clash with R Madhavan’s biographical film Rocketry on July 1. Rashtra Kavach Om recorded a rather dull opening of around 5 per cent on Day 1. On Day 7, it recorded a total of just Rs 8 crore.

Rashtra Kavach Om opened to mixed reviews at the theatres. On the opening day, the Aditya Roy Kapur-starrer minted just Rs 1.54 crore. However, the collection continued remaining low in the subsequent days. On Thurday, July 7, as well, the film failed to pull the audience to the theatres. Early trade estimates suggest that Rashtra Kavach Om raked in just Rs 8.67 crore on Day 7. It remains to be seen how the film fares in its second weekend in the theatres.

Reports suggest that the absence of strong actors and better-known faces was the reason the film failed to work. According to Box Office India, “Rashtra Kavach Om has taken a very dull opening of around 0-5% which means an extremely tough road ahead. The film is an action but the hero does not have a following or face value so the box office is always unlikely to respond. Either there has to be a fan base or the film has to have some brand value and sometimes even a newcomer is a better bet if he has the talent.”

Rashtra Kavach Om is an action thriller directed by Kapil Verma and produced by Zee Studios and Ahmed Khan. The film stars Aditya Roy Kapur, Sanjana Sanghi, Jackie Shroff, Ashutosh Rana, Prakash Raj and Prachee Shah Paandya. It released in the theatres on July 1. The music of the film is composed by Arko Pravo Mukherjee, Amjad Nadeem Aamir, Chirantan Bhatt and Enbee. Lyrics are written by Kumaar, Manoj Yadav and A. M. Turaz. The background score is composed by Amandeep Singh Jolly.

In June 2022, the title of the film was changed from Om The Battle Within to Rashtra Kavach OM due to the makers facing trouble with regards to the title rights. In the film, laced with heavy-duty action sequences, Aditya is seen as a para commando.