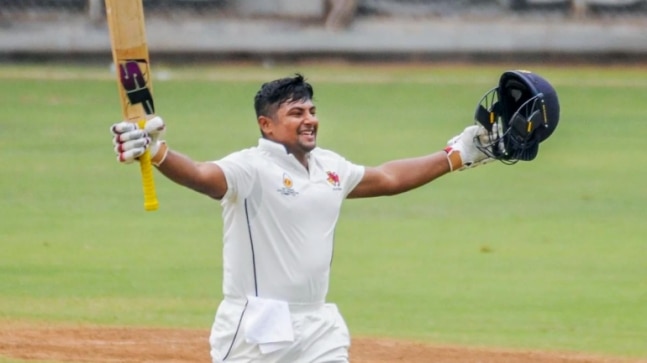 Ranji Trophy 2022: Sarfaraz Khan hit 153 from 205 deliveries for Mumbai against Uttarakhand, taking his tally this season beyond 700 runs in just 4 matches.

Mumbai batter Sarfaraz Khan is on fire in Ranji Trophy. He continued from where he left before the Indian Premier League as the 24-year-old hit his 7th hundred-plus score in the premier domestic first-class competition. Sarfaraz’s 153 which came alongside debutant Suved Parkar’s daddy hundred has put Mumbai in pole position in their quarter-final match against Uttarakhand at Alur Cricket Stadium 2 in Bengaluru on Tuesday.

Safaraz Khan has been in incredible form in Ranji Trophy since the 2019-20 season. The Mumbai batter had finished on top of the batting chart in 2019-20, scoring 928 runs in 6 matches, which included a 301 not out. Sarfaraz had averaged 154.66 for Mumbai in that campaign.

Cut to 2022, the Ranji Trophy got underway after going off the calendar in 2020-21 due to the Covid-19 pandemic and Sarfaraz has continued his scoring ways. In the league phase, Sarfaraz began his campaign with a 275 against powerhouses Saurashtra in Ahmedabad. He then carried on to score 63 and 48 against Goa before hitting 165 against Odisha in their final league-stage match as Mumbai made it to the knockout stages.

In the quarter-final, Sarfaraz tore into the Uttarakhand bowlers as early as Day 1 and continued to pummel the attack on Day 2, getting to his 7th first-class hundred. Sarfaraz finished with 153 from 205 deliveries, scoring a boundary in every 2 overs he faced. Safaraz hit 4 sixes and 14 boundaries in a blistering knock for Mumbai.

Sarfaraz has taken his tally in the ongoing season of Ranji Trophy to 704 runs in 4 matches, including 3 hundreds.

In an incredible piece of statistic, Sarfaraz’s first 7 hundreds have all been scores in excess of 150 and he is the first batter in the history of the sport to do so.

Sarfaraz’s first-class average has gone past 80 and he is only at the No. 2 spot behind the legendary Donald Bradman in the elite list for players with the highest averages with minimum 2000 runs in first-class cricket.

Despite his consistent run in first-class cricket, Sarfaraz Khan hasn’t managed to get an India call-up for Test cricket, which is a highly-competitive place at the highest level. The 24-year-old played only 6 matches for Delhi Capitals in IPL 2022.