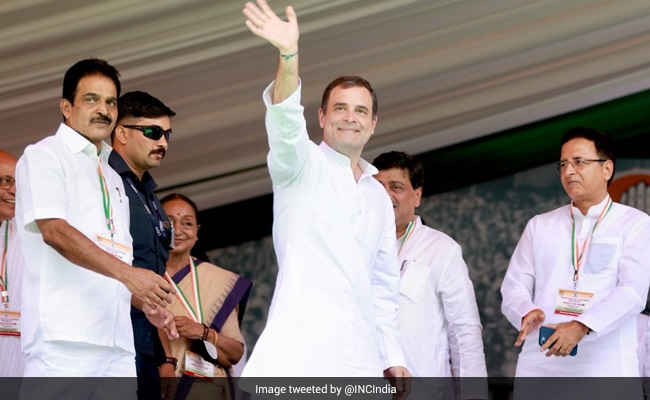 “PM Modi has weakened India in the last eight years,” he said.

There is growing hatred since the BJP government came to power in the country, former Congress President Rahul Gandhi said today from the stage at the Congress’s mega rally against price rise that’s underway at the Ramlila ground in Delhi. He said people are afraid — about their future, inflation, and unemployment — and that’s turning them towards hate. “BJP and RSS are dividing the country,” he added.

The ”Mehangai Par Halla Bol rally” by the grand old party witnessed huge crowds amid tight security arrangements. Several senior party leaders addressed the audience before Mr Gandhi stepped in with his no holds barred attacks against the PM and ruling BJP.

Taking aim at the Prime Minister, the Congress MP said “only two businessmen” are enjoying benefits from the government. “Be it airport, port, roads…everything is being taken over by these two people,” he said, referring to PM Modi’s rumoured friendship with two top industrialists.

“Narendra Modi is taking the country backwards, he is spreading hatred. Pakistan and China are benefitting from this. PM Modi has weakened India in the last eight years,” he said.

The rally sets the stage for Rahul Gandhi to hit the street with the party’s 3,500-km ‘Bharat Jodo Yatra’ from Kanyakumari to Kashmir starting September 7, where the former party President will walk across the country highlighting the issues of price rice and unemployment, and promoting communal harmony.

The ‘Bharat Jodo Yatra‘ is being touted as the Congress party’s biggest ever mass contact programme, where the party leaders will reach out to the common people at the grassroots level.

To mobilise party workers for its ambitious event, Congress leaders held press conferences in 22 cities across the country early this week and gave a “Dilli Chalo” for the rally.

In a Facebook post in Hindi, Rahul Gandhi had said the biggest problems facing the country today are unemployment, inflation, and growing hatred.

The Congress has accused the Centre of being “insensitive” to the pain of the common people due to rising prices and said it will continue fighting for their cause on the streets as the principal opposition.

Speaking with the media ahead of the rally on Saturday, General Secretary (Organisation) KC Venugopal had hit out at the BJP-led Centre for its “wrong policies” and alleged it was busy “buying MLAs” and toppling Opposition governments.

“This government is totally insensitive. You can compare the prices, from 2014 to 2022, how the prices of essential commodities have shot up,” said Mr Venugopal, flanked by Congress general secretaries Jairam Ramesh and Ajay Maken.

Congress spokesperson Gourav Vallabh said the Centre has been “misusing the CBI and ED” to “silence the Opposition” but the party will continue to raise its voice against the rising inflation and imposition of GST on essential food items.