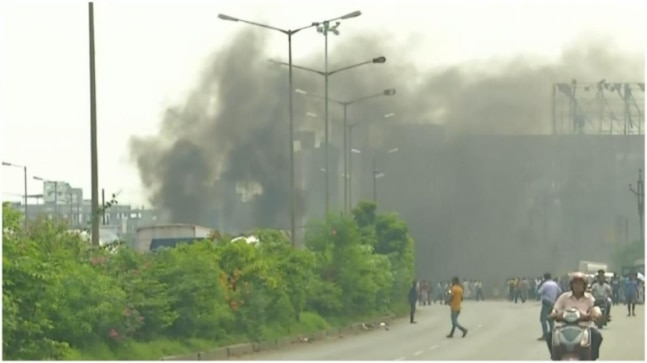 Several vehicles were stuck on the highway for over four hours. (Photo: Screengrab)

The protest was held despite an appeal by West Bengal Chief Minister Mamata Banerjee. Several vehicles were stuck on the highway for over four hours.

Visuals from the site showed protesters creating ruckus on National Highway 116, bringing traffic on the road to a near-halt. The protesters burnt tyres and shouted slogans on NH116.

Earlier in the day, CM Mamata Banerjee condemned the remarks on Prophet Muhammad by BJP leaders.

Terming the remarks ‘hate speech’, Mamata Banerjee said that these remarks led to ‘spread of violence’ and ‘division of the (secular) fabric of the country’.

“I condemn the recent heinous and atrocious hate speech remarks by a few disastrous BJP leaders, resulting in not only spread of violence, but also division of the fabric of the country, leading to disturbance of peace and amity,” she said.

The West Bengal chief minister also appealed people of all religions and communities to maintain peace and harmony in the country.