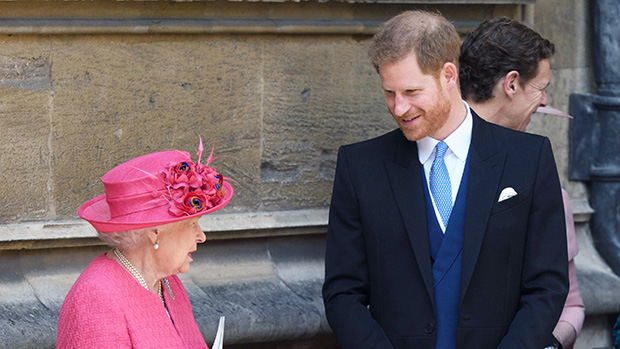 Prince Harry, 38, claimed in his bombshell 60 Minutes interview that he wasn’t invited to travel with his family to Balmoral Castle in Scotland on the day Queen Elizabeth II died. Harry told Anderson Cooper that he reached out to his brother, Prince William, 40, as the Queen fell ill on September 8. At the time, Harry and his wife Meghan Markle, 41, were in London for a charity event, when they learned his grandmother was expected to pass away.

“I asked my brother, I said, ‘What are your plans? How are you and Kate getting up there?’ ” Harry said in the interview. “And then a couple of hours later, all the family members that live within the Windsor and Ascot area were jumping on a plane together. A plane with 12, 14, maybe 16 seats,” he added. Harry confirmed he “was not invited” on the plane.

Harry flew on a private jet alone to Balmoral Castle while Meghan stayed behind. But the Duke of Sussex sadly arrived after the Queen had already passed away.  The rest of Harry’s family, including his father King Charles, 74, got to be with the Queen before she died.

“I walked into the hall and my aunt [Princess Anne] was there to greet me,” Harry said. “And she asked me if I wanted to see her. I thought about it for five seconds thinking is this a good idea? I was like, ‘You know what, you can do this. You need to say goodbye.’ So I went upstairs, took my jacket off, and walked in and just spent some time with her alone.”

Harry said that his 96-year-old grandmother was dead in her bedroom when he saw her. “I was really happy for her,” the dad-of-two explained. “She finished life. She completed life. And her husband [Prince Phillip] was waiting for her. And the two of them are buried together.”

Harry’s been doing interviews to promote his memoir Spare, which details his complex relationship with his family. In excerpts from the book obtained by ABC News, Harry claimed that King Charles banned Meghan from visiting Queen Elizabeth the day she died. Harry reportedly said he told his father in response, “Don’t ever speak about my wife that way.” A source told DailyMail that William’s wife Kate Middleton, 41, was also asked not to come to Balmoral Castle, since the family wanted to keep the circle around the Queen as small and private as possible.

Harry and Meghan eventually reunited with the royal family at the Queen’s funeral in September. Despite their obvious differences, Harry and William walked alongside each other at the procession of the Queen’s coffin to Westminster Abbey. The moment echoed Princess Diana’s funeral 25 years ago when the brothers walked behind their mother’s coffin.