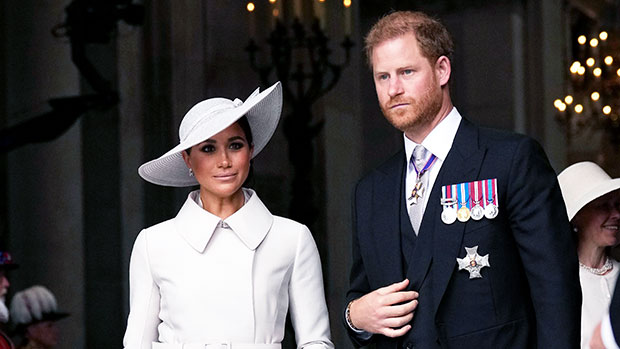 Prince Harry and Meghan Markle brought their two adorable children, 3-year-old son Archie and 1-year-old daughter Lili, to visit with their grandfather Prince Charles recently and it was reportedly a heartwarming family reunion. The royal gathering took place when the Duke and Duchess of Sussex were back in the United Kingdom for the Queen’s recent Platinum Jubilee celebration.

“The Prince, of course, hasn’t seen his grandson Archie for a bit of time and so it was very special to have some time with him,” a source told ET. As it was also the first time Prince Charles had met his grandaughter Lili, the source added that the get-together was “very emotional, a very, very wonderful thing.”

The trip marked the first time Harry and Meghan had  been back to Europe since they quit the royal family in 2020. “It was fantastic to see them. It was wonderful to have them back in Britain,” a second insider dished to the outlet. Prince Charles and his wife Camilla Parker-Bowles were reportedly “thrilled” to see the couple and their young children.

During the visit, they even stopped at Buckingham Palace to say hello to Harry’s grandmother, Queen Elizabeth, who also met Lili for the first time. “Being with her, it was great. It was just so nice to see her,” Harry said of the visit on Today. “She’s on great form. She’s always got a great sense of humor with me. It was really nice to catch up with her.”

Harry and Meghan were also on that side of the pond to help celebrate the return of the Invictus Games, after the sporting event was postponed in 2020 and 2021 due to the pandemic. Harry founded the tournament for injured and sick service members and veterans back in 2014 after he attended the 2013 Warrior Games in the United States, a competition held for wounded American veterans. The pair both made remarks at the opening ceremony — including a hilarious joke about Archie — and welcomed the competitors with rousing speeches.