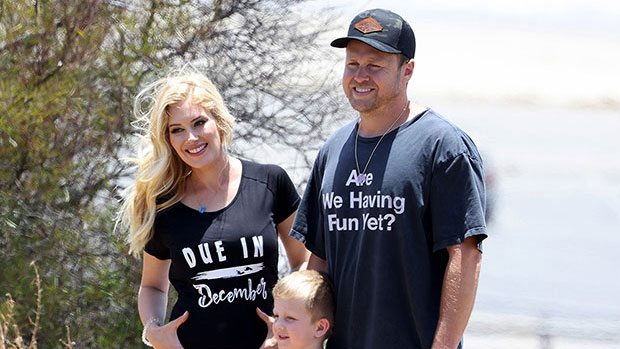 Heidi Montag and Spencer Pratt are having another boy! The parents of 4-year-old Gunner revealed on July 13 exactly how they found out the exciting news. “Oh, my gosh. … I did the earliest test to find out and I just felt like my doctor had the answer so I called. And I was like, ‘Hey, just wanted to check in to see if you guys got the result?’ And they were like, ‘Actually, we just got them 10 minutes ago’,” Heidi recalled to Us Weekly. “So I couldn’t wait for Spencer and I was like, ‘OK, I’m ready!’ They were like, ‘It’s a boy!’ And honestly, I was so shocked.”

The Hills alum said she expected to be pregnant with a girl, which is why she was in such disbelief. “I was going back and forth because everything felt the same as [when I was pregnant with] Gunner. ‘These are the exact same symptoms, the exact same thing.’” she explained. “But I think for the past year I kind of thought I’d have a girl. … But then when I found out it’s a boy — when the shock wore off — I couldn’t be happier because ultimately my biggest prayer was whatever would be the best for Gunner.”

Heidi and Spencer announced their second pregnancy on June 1. “I couldn’t be more excited,” Heidi told Us Weekly. “I don’t know who I’m most excited for — myself or Gunner or Spencer. I just felt like something was missing. I felt like a person was missing in our family that I had this intense love for. And I kept praying about it.”

The adorable couple had been open about wanting another kid for quite some time, but in 2019, Heidi revealed to HollywoodLife EXCLUSIVELY that her sleep schedule was getting in the way of plans to conceive. “I think [Spencer’s] nervous,” she said. “I think he’s a little bit nervous about it especially because I have such sleep depravation. He’s like, whenever you start sleeping, I’m fully supportive and ready but I think you need to sleep a little bit. Because I haven’t slept in like two years.” She added, “If I get one full night of sleep, baby making is on.”

Spencer and Heidi got together in 2007 and eloped during The Hills’ fourth season in 2008 in Mexico. They walked down the aisle in another ceremony in Pasadena, Calif., in 2009. They welcomed their first son in 2017.

Kevin Hart’s Brother Robert: Everything To Know About The Actor’s Look-A-Like Sibling