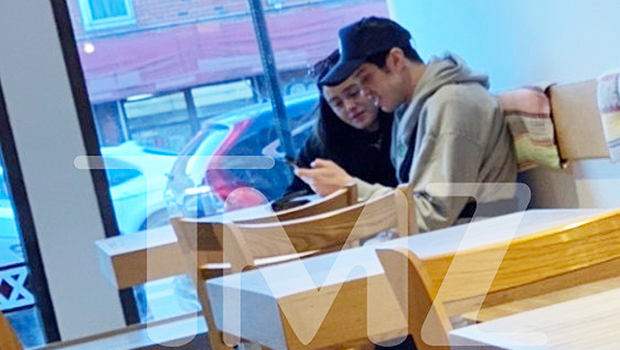 Pete Davidson doesn’t appear to be wasting time after his last relationship ended. The King Of Staten Island star, 29, was seen cuddling up to his Bodies Bodies Bodies co-star Chase Sui Wonders, 26, in New York City on Monday, January 9. In pics, the former Saturday Night Live funnyman sat in a corner restaurant table next to Chase, leaning in close to show her something on his phone. Per TMZ, the duo was waiting for takeout at Brooklyn’s Baba’s Perogies. In another snap, Chase pulled romantically in to Pete and wrapped her arm up around his neck.

The casual couple looked completely relaxed in the empty eatery, with Pete rocking his usual ball cap, along with a beige hoodie. Chase appeared to be wearing a dark, long-sleeved shirt with sunglasses pulled back on her head. It’s not the first time they’ve been seen together, either — Pete and Chase were spotted in December at a hockey game, and a few days later, outside his apartment late at night.

The PDA comes after Pete and Emily Ratajkowski, 31, split after a brief fling. And according to a source close to the comedian, Pete is “fine” with it. “Pete is still friends with Emily, but things were never that serious between them so he’s handling the split just fine,” the insider told HollywoodLife EXCLUSIVELY for a December 29 report. “They were never in a committed relationship to begin with so there is no bad blood between them,” they added.

Another source close to Pete told HL that “Pete was down to take things casually until he realized that Emily’s head was in an entirely different place than his with this,” noting that Emily has been seen out with various men since they began dating. “Seeing Emily out with other men did get to him, but he knew that it shouldn’t because he was not her boyfriend. He is down to be friends with her but does not know if this is going to happen. They are both so incredibly busy right now with their careers.”