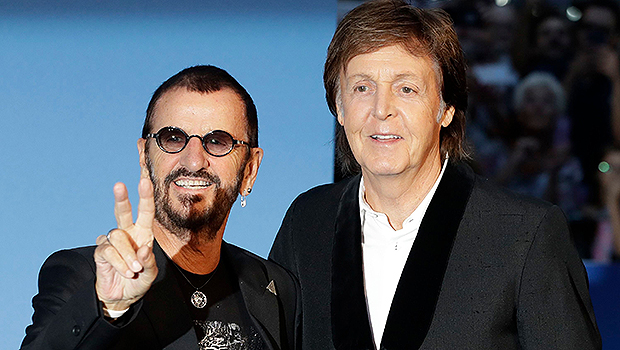 Paul McCartney, 80, took to social media to celebrate his longtime friend and legendary Beatles bandmate Ringo Starr on his 82nd birthday. “Peace to the world on Ringo’s birthday,” Paul wrote via Twitter in a July 7 post. “Same day as my Dad. Two very special men!”

The rock and roll icon included an onstage photo with Ringo. In the pic, Paul raised his hands with peace signs, a guitar strapped over his shoulders while wearing a blue button-down shirt and dark jeans. Ringo, at the microphone and rocking all black with sunglasses, also raised his arms with double peace signs. Paul included a distinguished-looking photo of his late father James McCartney, who passed away in 1976 at the age of 73.

Paul McCartney Then & Now: Photos Of The Beatles Bassist From His Young Years On

Paul and Ringo are the two surviving members of the incomparable 1960s band The Beatles, which parted ways back in 1970. Lead singer John Lennon died in 1980 after being shot by fanatic Mark David Chapman. He was just 40. Guitarist George Harrison died in 2001 of lung cancer, at the age of 58. As half of the world-famous, game-changing band, Ringo and Paul share a unique bond, which they continue to nurture to this day.

Back in April, the duo were snapped on a cheerful double date with their wives, Nancy Shevell, 62, and Barbara Bach, 74. Ringo and Barbara, along with Nancy and Paul, clearly enjoyed their relaxing dinner out in Los Angeles, smiling and even hugging each other.  And in 2020, Ringo and Paul delighted fans by reuniting on a new song, 50 years after the band split. The single, “Here’s to The Nights,” was off Ringo’s Zoom In album, and also included vocals from Sheryl Crow, Dave Grohl, Chris Stapleton, Lenny Kravitz, and more.

Ringo Starr’s Kids: Meet His 2 Sons & Daughter, Plus His Step-Kids

The nostaglic chorus certainly spoke to the decades-long friendship of the pals, as well. “Here’s to the nights we won’t remember // With the friends we won’t forget // May me think of them forever // As the days that were the best // May we make some noise together // Make a beautiful mess // Say we did it all.”