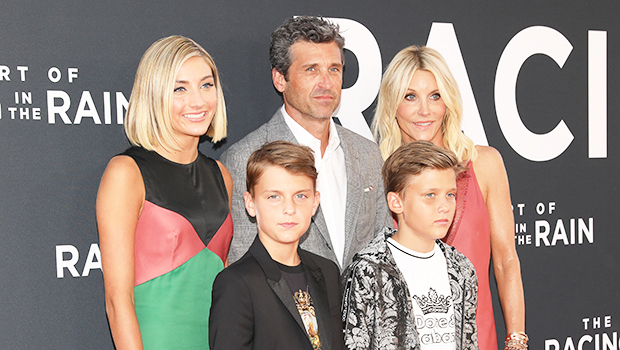 Patrick Dempsey, 56, has made a significant impact in the television world with his memorable roles as Dr. Derek Shepherd on Grey’s Anatomy and Dominic Morgan in Devils, but he’s also the proud father of three children, who he shares with his wife, Jillian Fink. The actor‘s brood includes daughter Talula Fyfe Dempsey, 20, and 15-year-old twin sons, Darby Galen Dempsey and Sullivan Patrick Dempsey. He has talked about his family on more than one occasion and revealed he loves having a “big” family.

“I love having a big family. I think it’s easier, oddly, in some ways, having three children as opposed to one. And it’s been great for my relationship with my wife and our life and everything,” he told Parade magazine in 2008.

Find out more about Patrick and Jillian’s kids below.

Talulah is Patrick and Jillian’s oldest child and only daughter. She was born in Feb. 2002 and seems to have a close bond with her dad. They have often been seen on various outings and doing various activities, including horseback riding and hanging out on movie sets, especially when she was younger. Patrick once revealed that she loved when he would be able to drive her to school and said they have a lot of good conversations.

“We talk about all kinds of things,” he told Parade. We listen to the news and discuss it. I remember when I would do stuff with my father and my mother. You want those moments. They go by very quickly, so you try to get them in when you can.” He also told People that it’s crazy to see Talulah and his other kids grow up so fast. “You go from a baby girl walking around in dresses to junior high and then high school. It’s a big transition. You have to weather the storm!” he said.

Although Talulah’s life has been pretty private, it’s known that she’s “creative” and has spent some time studying in London. She also graduated high school in 2020 and had to spend the last few months of her school year at home in quarantine due to the COVID pandemic. “The isolation for them and the lack of socialization is really challenging, especially senior year. My poor daughter missed everything. And that’s the only reason you go back, senior year, is [for the] proms. It’s the victory lap, you celebrate your education — and [she had] none of it,” Patrick explained on Jimmy Kimmel Live!.

Patrick Dempsey’s Wife Jillian: Everything To Know About Their Marriage, Their Almost Divorce, & Life Together

The family went on to hold a “mock prom” to make up for the disruptions in Talulah’s senior year and she went on to college. She now studies at a school in Washington D.C. and recently spent a summer in Paris, France.

Patrick and Jillian are also the parents of their twin sons, Darby and Sullivan. They were born in Feb. 2007 and Darby has the same middle name as Patrick while Sullivan’s middle name is Patrick’s first name. The boys are fraternal twins and were even born with different hair colors. Darby had blond hair at birth and Sullivan had black.

Patrick once told People that the boys also had quite different personalities and described Darby as “reserved and quiet” and Sullivan as “very funny” with “funny expressions in the way he’s taking things in.” The talented star also admitted that he thinks boys are “more active” than girls and talked about how energetic Darby and Sullivan were, especially when they were younger.

“Boys are completely different than girls for obvious reasons, but physically they’re so much more active! You cannot turn your back [because] there’s always an injury, there’s always something going on,” he shared on Jimmy Kimmel Live!. Darby has now developed a passion for soccer and Patrick even coaches his team, while Sullivan has a passion for acting, just like his famous dad.