If you were under the impression that prices of food and beverages on the Indian Railways are subsidised, then you are in for a shock. Imagine if you had to pay Rs 70 to drink a cup of tea during the train journey, then it is obvious that you’ll be surprised. However, it is true and has happened in reality.

When a passenger bought tea on a train, he had to pay a service charge of Rs 50 for a cup of Rs 20. As proof of this hi-fi service of the railway, that person shared the bill for that tea on social media, which has now gone viral. However, railway officials have given the reason for this.

The passenger was traveling on the Bhopal Shatabdi train running between Delhi and Bhopal on June 28. A post shared by the netizen containing two tax invoices of one tea each on his Twitter account has now left netizens flabbergasted. He wrote, “GST of Rs 50 on tea worth Rs 20. Altogether, a tea is worth Rs 70. Isn’t it an amazing loot?”

Many such complaints were repeatedly made about IRCTC, who provides catering service on the railways. However, the complaints fell on deaf ears. After that, some social media users corrected him and said that it is not GST, only the service charge has been levied. At the same time, many users said that the service charge of Rs 50 for a cup of tea is too much.

According to railway officials, no extra money was charged from the customer. A circular issued back in 2018 by Indian Railways specifies that, when a passenger does not book a meal while making a reservation in trains like Rajdhani or Shatabdi, then a service charge of Rs 50 has to be paid for ordering tea, coffee or food during the journey. Even if it is just a cup of tea. 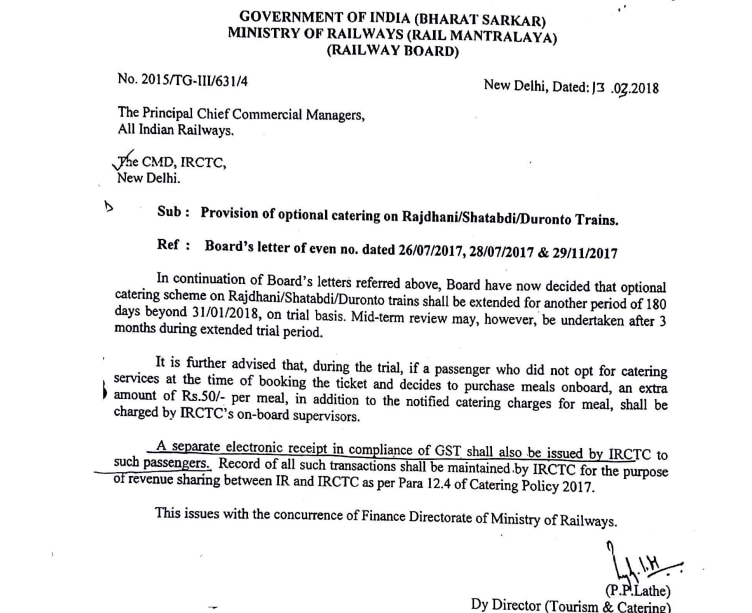 For the uninitiated, earlier food service was mandatory on trains like Rajdhani or Shatabdi, but later it was made optional. That is, if the passenger wants, they can refuse to take food and refreshments on those trains. In such a situation, they would have to pay only for the ticket, not for the food service.