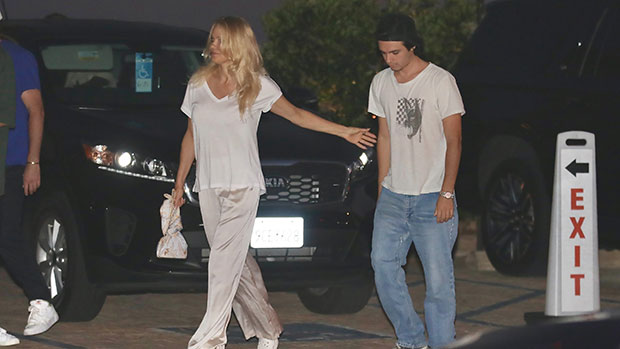 Pamela Anderson met her youngest son, Dylan Swagger Lee, for dinner on Wednesday (Aug. 24). Pamela, 55, and Dylan, 24, decided to dine at Nobu in Malibu. Afterward, the two parted ways – not before some motherly love. The Baywatch star and noted animal rights activist leaned in to give Dylan a sweet side-hug and a kiss on the cheek.

It was a lovely showing between these two, who dressed casually for dinner. Dylan opted for a pair of faded, loose-fitting leans, a white shirt sporting a black cat print, and a couple of well-loved shoes. He also rocked a backwards cap and a bright watch on his wrist. His mother also dressed for comfort. Pamela wore a white t-shirt with cream satin trousers and white Crocs. The bombshell kept her blonde locks loose and down around her shoulders.

This year has been an exciting one for Pamela. In April, she made her Broadway debut, ) playing Roxie in a revival of the musical Chicago at the Ambassador Theatre. Though she was nervous about performing in her first acting gig in years, a source told HollywoodLife EXCLUSIVELY that she cried “happy tears” following her first performance. She was “super emotional because of how favorable the critics [were] to her performance,” the insider added. “She put her heart and soul into this, and, although she was nervous before going on stage during last night’s opening, she was also very excited to finally get a chance to show the world what she is truly capable of.”

“Eleven years ago, Rob Marshall and his partner saw me on the beach in Malibu at a surf contest with my sons,” she told Paper magazine in May.” He approached me and asked if I’d consider a career on stage. Broadway, he said he knew I was capable. I thought he was joking. He asked for my number, and the infamous Barry Weissler called me the next day. We met and talked it through, but New York was far from my boys’ school. I said it would have to wait.”

Thankfully, the “stars aligned” for Pamela, who was kicking herself over this lost opportunity to do something beyond the beach. “I was watching the Fosse/Verdon series on Hulu, and Barry called during the part where Gwen was trying to convince Bob to do Chicago,” she told Paper. “I said, ‘When do you think?’ And he said, ‘I want you in rehearsals next week.’ I just took a chance and said ‘yes’ without overthinking. I rehearsed in LA for two weeks, every day, all day: Dance, voice, acting coach. I poured myself into the experience, and it honored me.”

While Pamela has bared her heart and soul, her ex — Tommy Lee – bared a lot more when he posted a full-frontal photo on Instagram in mid-August. He later explained that he “went on a motherf-cking bender” and after getting “f-cking sideways,” he “got naked and posted pictures” of himself online.