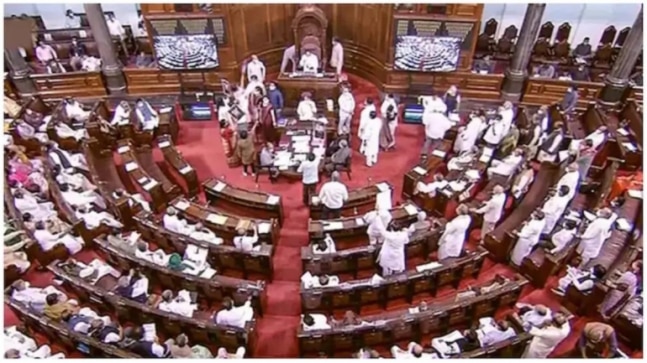 Indian women of this generation will be the biggest victims of a private member bill that seeks to regulate population by promoting two-child per couple policy, opposition members said in the Rajya Sabha on Friday.

Taking part in a discussion over the Population Regulation Bill, 2019 moved by BJP’s Rakesh Sinha, opposition members Fauzia Khan (NCP) and L Hanumanthaiah (Congress) also expressed apprehension that the move is targeted at a particular community and if passed, it will further marginalise the marginalised.

“The biggest victims of the bill will be Indian women in general of this generation, irrespective of any community,” Khan asserted.

She said that as such at present many women in India can’t refuse marriage or having children and they are also forced to undergo non-voluntary birth control measures. Irrespective of their health, they are forced to undergo pregnancy for the want of a boy child, she said.

Manoj Kumar Jha (RJD) said no law should lead to victimisation of women.

“There is maximum possibility of victimisation of women in this,” he said participating in the discussion on the bill.

“… history, not just in this country but world over, including the US, is witness to the fact that strong abortion and population control laws have not worked,” Patnaik said, adding the logic that development is the best population control measure still “holds good”.

Khan said,”The bill carries the potential to systematically alter the India’s social fabric itself… It will allow the government to stand aside and watch as children and their parents die for lack of healthcare and protection.”

She alleged that a false propaganda has been spread that the birthrate of Muslims is outpacing those of Hindus through “statements by many prominent leaders, specially in election meetings”.

She further said the bill “offers to perpetuate a long-standing anxiety around India’s population growth but takes on a particularly dangerous turn by attaching reproductive lives and children to direct exclusion from polity”.

Arguing that India’s population growth rate is already slowing down and the current situation is not worrisome, she said, “Considering a demographic shift (has) already occurred and is intensifying, the bill will only further marginalise the already marginalised.”

Opposing the bill, Hanumanthaiah said across the country propaganda has been made that a particular religion or a community is reproducing more and that is why the population is going up but it is totally false and the myth has to be broken.

Instead, he said, “Take actions on so many socio-economic factors of the country and see that we are a healthy society and a healthy Bharat.”

He rued that the lack of education, basic infrastructure like toilets and water in rural schools and healthcare facilities are leading to unwanted pregnancies and maternal deaths, and these must be addressed first.

Taking part in the discussion, V Sivadasan of the CPI(M) emphasised that there needs to be a discussion around the pathetic living standards of majority of Indian children and measures taken to prevent infant deaths.

Drawing attention to inadequate allocation for education and healthcare and poor state of infrastructure of Aanganwadis, Sivadasan asked, “How will children in our nation get proper health and education facilities?”

Jha of RJD said that over the last few years politicians have assumed the role of historians, and similarly, they are also taking over demography-related work.

“Demography is a very serious business it should be left to demographers. And we have no dearth of great demographers in this country who have contributed immensely and provided insight and direction,” he said.

Participating in the discussion, Binoy Viswam (CPI) questioned the approach of the bill and the proposed punitive measures, saying the challenges faced by the country are on account of poverty and not due to its population.

Even as Viswam was speaking on the bill, Rajya Sabha Deputy Chairperson Harivansh cited paucity of time and requested him to resume his speech when the matter is taken up again. The House was adjourned for the day after special mentions.

Earlier, BJP MP Vikas Mahatme sought to allay concerns of the opposition that the bill has been brought with an eye on the Muslim population, saying it has been introduced to prevent demographic dividend turning into a “demographic disaster”.

While children are resources of the nation, they can’t be called demographic dividend unless they can be given proper education and skills, and proper investments are made on them, he said.

Mahatme also asserted that one of the most important things, when it comes to having children, must be the woman’s consent and she must have access to free contraceptives.

Supporting his party colleague, Mahesh Poddar (BJP) said there will be inequality in the society and among states if there is no control over population growth.