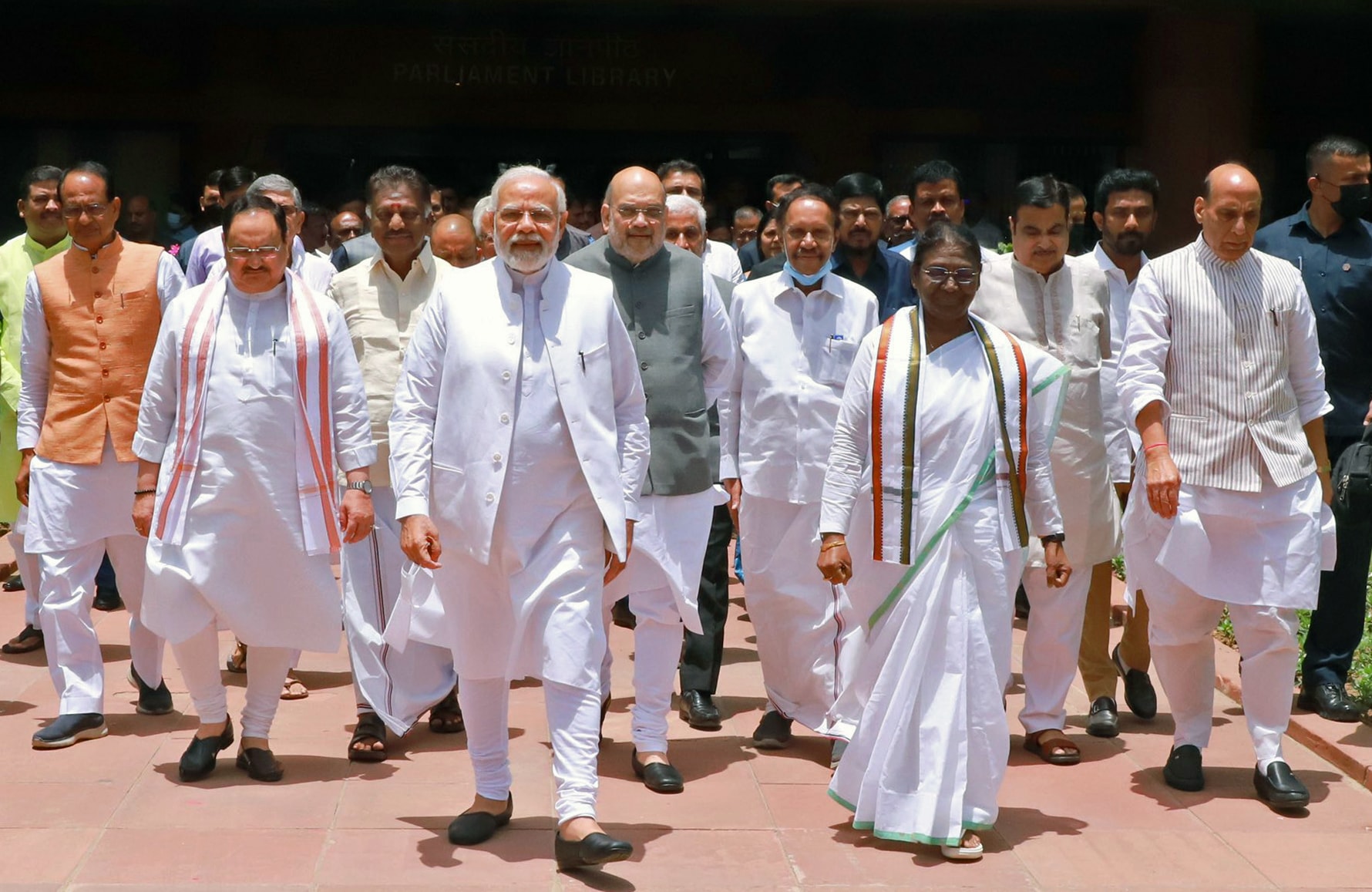 July 21 will go down in history as a great day for democracy. The day a tribal woman was chosen President of India. Droupadi Murmu is not only the country’s second woman President but also the first tribal woman to become First Citizen.

Whether she proves to be an active President or merely a rubber stamp will be decided after five years. Yashwant Sinha, despite a long, distinguished and successful career in politics, lost the battle. His defeat was a given. The BJP under Prime Minister Narendra Modi had the numbers for an easy win. The opposition once again faces some fundamental questions.

The word masterstroke is a much-used word in the Modi era, by BJP supporters and their friends in the media. So much that it has lost its meaning.

But the choice of Droupadi Murmu as a candidate underlines strategic thinking in the BJP and its appetite to win every electoral battle, convincingly, to convey invincibility – of the party as well as its top leadership.

Yashwant Sinha is an excellent candidate who proved himself as an extremely competent minister under Atal Bihari Vajpayee. But in a changed and highly-polarised political scenario, he was not the ideal candidate. In some era, he would have been an excellent candidate for the top post. But not in today’s politics and here lies the folly of the entire opposition.

This is the age of the identity politics and Droupadi Murmu’s selection was a political message. It was an attempt by the BJP to reach out to the tribal community for electoral gains. Since Modi has taken charge of the BJP, the party has been consistently trying to spread its reach to territories where it never had any presence.

Before 2014, the BJP had cadre, an ideology and a strong organization, but it was still called an upper caste party. On Modi’s watch, the BJP has further consolidated its upper caste votes, especially in north India. According to a CSDS (Centre for the Study of Developing Societies) survey, more than 85% of the upper caste, particularly Brahmins, now vote for the BJP.

But it is the deep inroads in the OBC and Dalit communities that has turned the BJP into such a formidable force. In the recent Uttar Pradesh election, the virtual annihilation of Mayawati’s BSP and the shifting of a majority of non-Jatav Dalit votes towards the BJP is proof.

Despite the Samajwadi Party’s good show, the BJP made gains among the “other than Yadav” votes. The BJP in UP was facing anti-incumbency, yet it won a majority and the Samajwadi party was a distant second despite improving its vote share by 10%. This was possible because the BJP reached out to new voters amongst women, Dalits and the OBC. It is no coincidence that Droupadi Murmu is a tribal and she belongs to Odisha.

The BJP knows that other than the north Indian states, it has to break new ground in West Bengal and Orissa.

In the last assembly and parliamentary elections in West Bengal, the BJP emerged as the principal opposition party, decimating the Left parties and the Congress. This was the state where the BJP had negligible presence before 2014. After Bengal, BJP’s next target is Odisha. The BJP knows Naveen Patnaik has won the last five elections and is not getting younger. The BJP would like to throw a serious challenge to Naveen Patnaik, like it did to Mamata Banerjee in Bengal. It has also aimed at tribal voters in Jharkhand, Bengal, Chhattisgarh, Gujarat, Telangana and Andhra Pradesh.

It can be argued that just because the BJP made Droupadi Murmu President does not mean tribal voters will automatically switch to the BJP.

Ramnath Kovind becoming President did not translate to Dalit votes magically shifting to the BJP but what comes through is the knack for strategic thinking, the desire to conquer new frontiers, the appetite for those extra votes and the killer instinct to win elections.

In a vast country like ours, political messaging is very important. The selection of a tribal candidate after a Dalit president sends the message that the BJP is no longer an upper caste party; it cares for the people on the margins and it is committed to empowering them.

So Droupadi Murmu has the USP, despite being the “lightweight candidate”, and Yashwant Sinha falls short, in the time of obsessive identity politics. He was a good candidate but at the wrong time.

That is the crux of the opposition’s failure to put up a respectable fight against the BJP. In the presidential election, the opposition faithfully repeated its mistakes.

Its deficiency lies in the fact that at the national level, it has failed to read Modi’s mind; it has not been able to predict his political moves; and it has mostly been caught napping.

Modi brought in Murmu and it befuddled many opposition parties. JMM, one of the proposers of Yashwant Sinha’s name, voted for Murmu; Uddhav Thackeray’s Shiv Sena also changed its mind. Even Mamata Banerjee was forced to admit that had she known about Murmu’s candidature, she would not have suggested Yashwant Sinha’s name.

It is unfortunate that a candidate like Yashwant Sinha could not attract the extra votes and couldn’t challenge the BJP and parties supporting it. Not even a little bit. But if the opposition had put up a strong OBC candidate or a Dalit, it would have managed some sort of political message. OBC and Dalit leaders and caste-based parties in the ruling dispensation would have found it difficult to ignore.

Unlike in the past, politics today is a 24/7 game which is played in a giant open colosseum. People watching the game prefer those who are gladiatorial in their instinct, who fight to the finish and leave no stone unturned. In the world of polarised interconnectedness, there is nothing called a symbolic fight.

(Ashutosh is author of ‘Hindu Rashtra’ and Editor, satyahindi.com.)