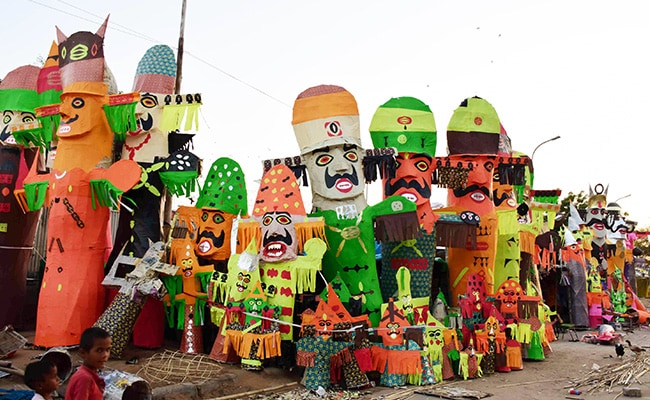 Locals claim the tradition of worshipping Ravana for his “intelligence and ascetic qualities.”

Residents of a non-descript village in Maharashtra celebrate Dussehra in a different way as they perform the ‘aarti’ of demon king Ravana on the festival when his effigies are burnt in other parts of the country.

Many residents of Sangola village in Maharashtra’s Akola district believe they are employed and able to sustain their livelihood because of Ravana’s blessings and the peace and happiness in their village is because of the demon king.

Locals claim the tradition of worshipping Ravana for his “intelligence and ascetic qualities” has been going on in the village for last 300 years.

At the centre of the village stands a tall black stone statue of the 10-headed demon king.

The villagers believe in Lord Ram, but they also have faith in Ravana and do not burn his effigies, local resident Bhivaji Dhakre told news agency PTI on the occasion of Dussehra today.

Visitors from across the country come to this small village on Dussehra every year to catch a glimpse of the Lanka king’s statue and some even offer prayers, locals said.

Sangola resident Subodh Hatole said, “With the blessings of Mahatma Ravana, today many people in the village are employed. On the day of Dussehra, we worship the statue of Ravana with a maha-aarti.” Some of the villagers hail Ravana as a “scholar” and believe he abducted Sita for “political reasons and preserved her sanctity”, Dhakre said.

Local temple priest Haribhau Lakhade said while the rest of the country burns effigies of Ravana on Dussehra, symbolising the victory of good over evil, residents of Sangola worship the demon king for his “intelligence and ascetic qualities”.

Lakhade said his family has since long been worshipping Ravana and claimed the happiness, peace and contentment in the village is because of the Lanka king.