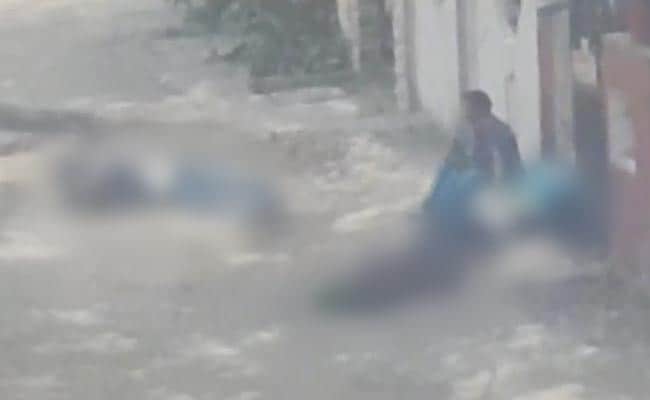 All three died on the spot in the middle of the road.

In a shocking triple murder case in Bihar’s capital Patna, a man shot his daughter, his wife, and then turned the gun to his own head and fired. All three died on the spot in the middle of the road. Disturbing video footage of the incident has surfaced where a man sporting a backpack, pistol in hand, can be seen stopping a group of three women and arguing with them. All of a sudden he points the gun at the head of a young girl and pulls the trigger. She instantly drops to the ground. He then shoots another older woman in the head at point-blank range and then shoots himself in the side of the head. All three collapse immediately on impact. The other woman was identified as the attacker’s former wife and the young woman’s stepmother.

The third woman, identified as the grandmother of the young girl and mother-in-law of the attacker, can be seen sitting on the ground in shock while the three dead bodies lay around her. All of this happened in barely a few seconds.

The attacker has been identified as Rajeev Kumar, who was married to the sister of Shashiprabha – the woman he shot. He had then married Shashiprabha after her sister died of natural causes, the police said. Relationships reportedly soured between them and the woman divorced him. The young woman he shot is Sanskriti, his own daughter from his first marriage. She also refused to live with him and moved in with her stepmother instead. The woman had married a man who works with the Air Force after leaving him and was living with him in a rented apartment in Patna’s high profile Police colony area, home to top retired police officials.

The man had allegedly threatened the woman and his daughter to come back to him but they had refused. When they were on their way back from a wedding in Begusarai, Rajesh waited in the street and murdered them before they could reach home.

Police say they are trying to establish the antecedents of the man but it appears that he was mentally unstable.

“We got the information at around 12:40 pm. This is a very serious incident so all top police officers in the area reached the spot. We recorded the statements of several witnesses who witnessed the murder. We are also scanning CCTV footage,” a police officer said.