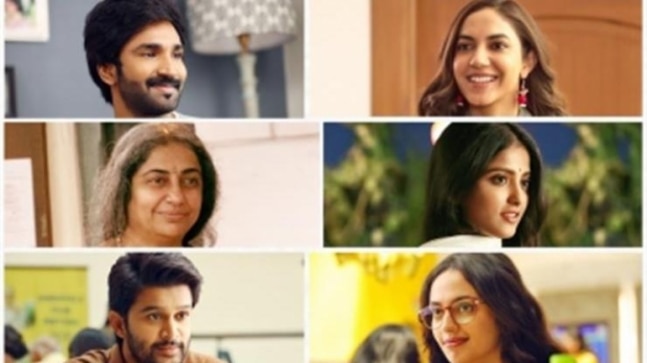 Amid blood, gore, guns and violence, watching a heartwarming feel-good film or a show is refreshing. So much so that it feels like the first sip of lemon juice in peak summer. Amazon Prime Video’s new anthology, Modern Love: Hyderabad, with its six short films, aims at just that. All these films show how dependent people are on friendships, love and family.

Director Nagesh Kukunoor, who directed three of the six short films, highlighted complex familial bonds. In My Unlikely Pandemic Partner, he portrayed the broken relationship of a mother and daughter. It is food, especially the Nawabi feast, that helps in mending their relationship during a lockdown. This is one film that looks past the biriyani that Hyderabad is famous for. We are introduced to so many dishes that make you drool. The film shows how the mother and daughter drifted apart sensitively. My Unlikely Pandemic Dream Partner highlights how parents fall prey to archaic beliefs and how it affects their children. While the film shows the lovely bond between the two (with terrific performances), it gets boring after a point as the story doesn’t move anywhere. However, the final act wins the heart.

Fuzzy, purple and full of thorns

If My Unlikely Pandemic Dream Partner dealt with a mother-daughter relationship, here Nagesh explores the complex relationship between a live-in couple played by Aadhi and Ritu Varma. The two characters have a filmy introduction. Aadhi catches Ritu as she faints after seeing blood and he gives her first aid. Their meet-cute then evolves into a live-in relationship. While this could have been a breezy rom-com, the filmmaker chose to give in to stereotypes. When Ritu finds Aadhi’s ex-girlfriend’s heels in her cupboard, she gets jealous and possessive. She turns into a nagging girlfriend, which almost breaks their relationship. It is 2022 and to see women being tagged as nagging is stereotypical.

What clown wrote this script!

Uday Gurrala’s What Clown Wrote This Script is one of the promising shorts in this lot. It shows the relationship between a standup comedian (Malavika) and a TV show producer (Abijeet). It is not love at first sight for them. They decide to collaborate on a project that talks about the qualities of a Telugu man and gradually, they fall in love. Abijeet and Malavika’s characters are written with so much sensitivity. There’s also a cheeky comment that Abijeet makes about #MeToo and Malavika corrects him. The show points out that a woman in a relationship can say no and the man, without becoming a cry baby, can take the rejection.

Why did she leave there?

In this short, Nagesh Kukunoor explores the unconditional relationship between a grandmother and grandson. This is one of the shorts that could make everyone well up. Suhasini raises her granddaughter and grandson in a slum by working as a domestic help. When she loses her granddaughter, she doesn’t have time to process the grief as her grandson (who is orphaned) needs to be taken care of. But, at a point, she is forced to take a decision that will help her grandson’s future. And when she does that with absolute grit, you can’t help but empathise with her. When the grandson grows up, he gets closure in life by revisiting the path and why his grandmother did what she did.

About that rustle in the bushes

This particular short, directed by Devika Bahudhanam, is about how a woman in her late 20s finds love by going on dates. She’s willing to come out of her cocoon after a tragic past. But, her father follows her wherever she goes and takes pictures of her like a stalker. About That Rustle in The Bushes is unimpressive as it’s quite manipulative. It also emphasises the fact that whatever our parents do, it’s for the good, even if it is an invasion of privacy. This archaic thought was recently explored in the Tamil film, Don, and it’s the same here as well.

Director Venkatesh Maha’s Finding Your Penguin is the only short that tries to experiment. Like About the Rustle in the bushes, this short film also talks about a woman who is on a quest to find her soulmate after a breakup. Since she is a microbiologist, she compares the behaviour of the mating patterns of animals and birds. Komalee Prasad is a hoot in this short and Venkatesh Maha went all out in showing a bold and needy woman. Her friends are supportive and encourage her to come out of her shell. The scripting and the performances aided in selling this simple story. Watch out for the scene where Komalee and her father have a heartfelt conversation about her selecting a guy for her.