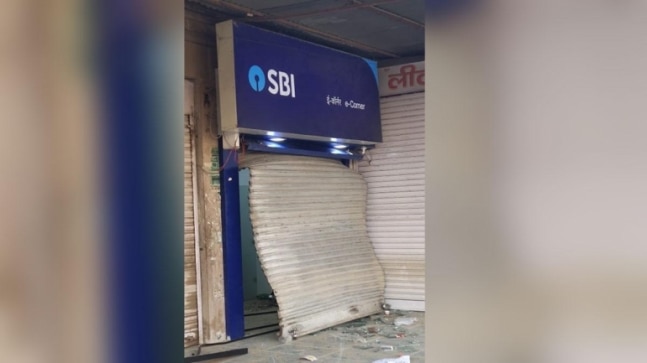 At least five masked men uprooted an ATM containing Rs 38 lakh rupees in just 12 minutes in Rajasthan’s Barmer. Police are scanning the CCTV footage of the crime scene to arrest the accused.

It was almost a child’s play for five masked men who just took 12 minutes to uproot an automated teller machine (ATM) containing Rs 38 lakh from a busy market area in Rajasthan’s Barmer. The miscreants arrived in a Bolero on Tuesday night, loaded the uprooted ATM into their vehicle, and vanished into the air. The incident has been captured on CCTV cameras.

A preliminary police probe revealed that five masked men arrived in a Bolero and broke the shutter of the ATM. The robbers also damaged the CCTV cameras and used the chain of the vehicle to uproot the ATM loaded with cash in 12 minutes and sped away.

The security guard was the first one to notice the crime on Wednesday morning. The guard immediately informed the police about the loot, who reached the spot and started the investigation. After receiving the information, Nagana police station officials swung into action and reached the crime scene and started scanning the CCTV footage to arrest the miscreants.

An initial probe suggested the involvement of five people in the crime. The accused seem to have done recce of the area before committing the crime, police said.

Nagana police station official Narpatdan said that the miscreants had arrived in Bolero. He said that the police are scanning the CCTV footage around the bank and ATM and efforts are underway to arrest the accused.