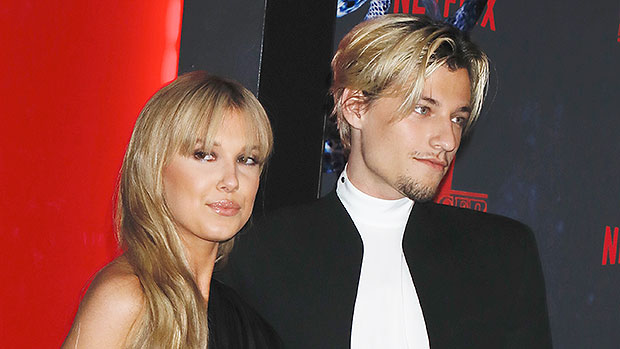 Love is in Italy for Millie Bobby Brown and her boyfriend Jake Bongiovi, the son of famous rockstar Jon Bon Jovi! The adorable couple was spotted packing on the PDA while having some fun in the sun on a private boat in Sardinia, Italy, on July 7 in photos that can be seen here. Millie, 18, rocked a black-and-white gingham print bikini with a wavy neckline. She paired the cute suit with a black and gray baseball cap, black sunglasses, dangling white earrings, plus a matching necklace and bracelet set that featured black stones.

Jake, 20, sported a maroon bathing suit he paired with a blue polo tee. He matched his girlfriend with black sunglasses but opted for an all-white cap he wore backward. He appeared to be holding Millie’s straw purse for her like a gentleman as when they walked barefoot along the dock. While they were on the boat, though, Jake made sure to lean in to grab a smooch from the Enola Holmes star.

Millie and Jake have not been shy about their PDA lately, and the British actress even shared a smooching snapshot with her beau at a Harry Styles concert on June 19. In the photo, Millie lovingly wrapped her arms around Jake’s neck, as he put his arms around her lower back. “alexa play love of my life by harry styles,” Millie captioned the post. Before that, Millie shared another kissing moment between her and Jake on her Instagram Story. In the photo, the couple both wore white collared shirts. Millie wrapped her left arm around Jake’s neck and held his face with her right hand as she sat on his lap.

Millie Bobby Brown Then & Now: See Her Evolution Ahead Of The ‘Stranger Things’ Finale

Millie and Jake have been dating for nearly a year, first going Instagram official in Nov. 2021. They sparked romance rumors when Jake posted a selfie with Millie in June 2021 and called her his “bff” in the caption. Just a few weeks later, the BAFTAs red carpet together in March, followed by the Stranger Things Season 4 premiere in May. Following the event, Jake gushed about his girlfriend on Instagram alongside a photo of them posing on the carpet. “Congratulations babe u deserve the world love you,” he wrote.

It looks like Millie has met her real-like Mike!

Millie Bobby Brown’s Boyfriend History: Everything To Know About Her Romance With Jake Bongiovi