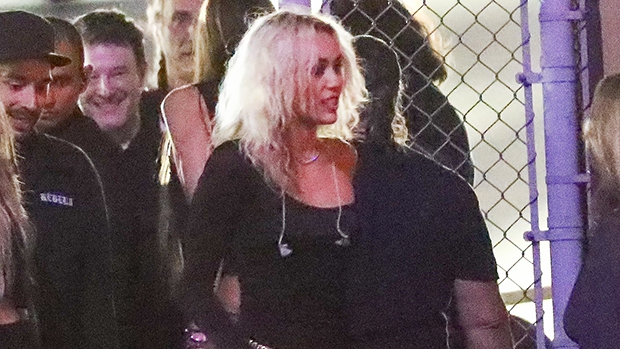 Miley Cyrus joined a group of other A-listers Tuesday evening to celebrate the life and legacy of Taylor Hawkins, the late Foo Fighters drummer who died at the age of 50 on March 25. Miley, 29, performed at the Foo Fighters & The Hawkins Family Present Taylor Hawkins Tribute Concert in Los Angeles on Sept. 28 in a long-sleeve, black mini dress. She accessorized with a silver belt and silver necklace and completed her edgy look with skinny black boots.

The “Wrecking Ball” hitmaker appeared to have been fresh off the stage when she was photographed exiting the Kia Forum, as her performing earpiece was still hanging around her neck. Miley’s drummer boyfriend, Maxx Morando, mother Tish Cyrus, and sister Brandi Cyrus, were present for the show as well. The sighting of the bleach-blonde beauty is a rare one, as she has only been spotted in public a handful of times over the last few months. She last posted on Instagram in June from the beach and in August to show off her Gucci perfume campaign.

Kourtney Kardashian and Travis Barker were also pictured leaving the building hand in hand. The reality star, 43, donned a rocker-chic distressed black denim dress with s gray turtleneck underneath paired with chunky boots and silver jewelry. The 45-year-old Blink-182 drummer, who also performed, looked stylish in plaid pants and a black graphic tee that he paired with black sneakers. Like his wife, he also accessorized with silver jewelry and added a black beanie.

Singers Pink, 43, and Alanis Morissette, 48, used the same exit as the above-mentioned stars. Pink donned a black lace bodysuit, wide-legged blue jeans, and a Gucci belt, while Alanis kept with the rocker vibes in black cut-off jeans, a plain white t-shirt, and an unbuttoned black blouse. Kourtney shared a video of Alanis singing her 2005 hit “You Oughta Know” on stage during the tribute to her Instagram Story.

Other performers at the concert included Queen, the Red Hot Chili Peppers, Rush, and more. The Los Angeles show is the second tribute concert held for Taylor this month, with the first taking place earlier in September at London’s Wembley Stadium. Kourtney and Travis were also photographed there holding hands, as posted on the Poosh founder’s Instagram post below.

Taylor died on March 25 in Colombia just hours ahead of a scheduled Foo Fighters performance at the Festival Estereo Picnic. The band announced the news on Instagram with a heartfelt post. “The Foo Fighters family is devastated by the tragic and untimely loss of our beloved Taylor Hawkins,” the band’s official social media accounts wrote in a statement. “His musical spirit and infectious laughter will live on with all of us forever. Our hearts go out to his wife, children and family, and we ask that their privacy be treated with the utmost respect in this unimaginably difficult time.”