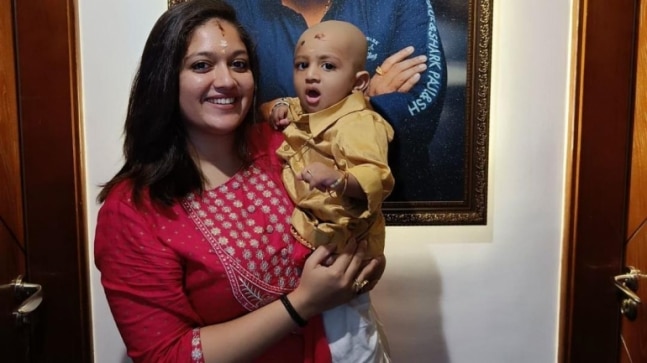 Meghana Raj recently shared a cute video of her son, Raayan Raj Sarja, trying to talk. Raayan is one and a half years old.

Meghana Raj is a working mother and she loves spending time with her son, Raayan Raj Sarja. On June 15, she took to her Instagram page to share a video of her teaching her son to say ‘Amma.’ While little Raayan repeats ‘Amma’ for a few times, he ended up saying Appa for the fourth time, which left Meghana puzzled. Raayan Raj Sarja is one and a half years old.

Almost a year after giving birth to her son, Meghana Raj got back to work. She judged a dance reality show and has a couple of films lined up at different stages of production.

On June 15, Meghana Raj took to Instagram to share a beautiful video of herself and her son, Raayan. In the video, she can be seen teaching her son to say Amma. While he repeats it three times, he says ‘Appa’ the fourth time and started laughing.

ALL ABOUT MEGHANA RAJ

Meghana Raj and Chiranjeevi Sarja are popular actors in the Kannada film industry. Chiranjeevi passed away on June 7, 2020, after suffering a massive heart attack. He was 39 years old. Sadly, he passed away before the birth of his son. Five months after his demise, Meghana Raj delivered her son.