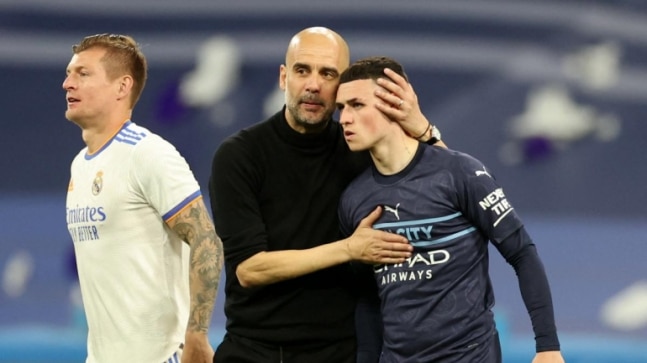 Champions League: Manchester City let go off an opportunity to book a place in the final despite leading for the most part of the semi-final as Real Madrid struck 3 late goals in the 2nd leg at the Bernabeu on Wednesday.

Pep Guardiola conceded that the stunning defeat to Real Madrid in the Champions League semi-final second leg did sting but promised that Manchester City will rise again. The decorated tactician said the Premier League leaders will need a couple of days to get over the loss, which came after a stunning turnaround at the Bernabeu from Real Madrid.

Manchester City looked set to head to the Paris final when they were leading 5-3 on aggregate until the 90th minute of the 2nd leg of the semi-final away from home. Having traveled to the Spanish capital with a 4-3 lead from the first leg, City extended their lead when Riyad Mahrez put them ahead in the 73rd minute at the Bernabeu.

However, City suffered a meltdown, conceding 2 late goals that saw the match slip into extra-time. Rodrygo struck twice at the end for Real and Karim Benzema completed the comeback in extra time to deny Guardiola’s side a second straight Champions League final.

“We need time now, one or two days, but we’ll rise, we come up, we have to do it with our people,” said Guardiola.

“That feeling that happens in football sometimes, that has happened in history, when you are leading but you get to the end and you are being dominated – that didn’t happen to us.”

The Spanish coach last won the Champions League in the 2010-11 season with Barcelona, failing to get his hands on the trophy with Bayern Munich and City.

Asked if this was his toughest European defeat, Guardiola said: “I’ve had defeats that were so tough, Barcelona against Chelsea when both games were exceptional and we could not reach the final and yes it’s tough for us, we cannot deny it.”

City lead Liverpool by one point in the Premier League and host Newcastle United on Sunday.